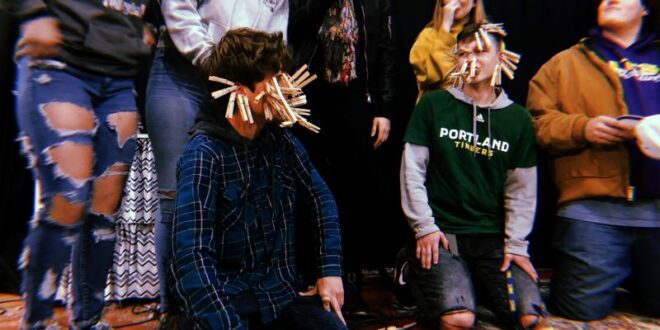 Students play a game to see how many clothespins they can stick to their partners' faces during weekly Young Life club events. / Contributed

Springtide Research Institute surveyed over 10,000 people aged 13-25 at the end of 2021 to identify how religious organizations are serving Generation Z and how members of that demographic are pursuing religious engagement, said Springtide Executive Director Josh Packard.

“The pandemic is really exposing what our systems are designed and not designed to do when it comes to engaging young people in conversations about faith,” Packard said. “There was a lack of institutional spiritual and religious engagement from young people at a time when they really needed it.”

The survey found 50% of respondents felt they do not need faith communities because they have other types of communities. Additionally, young people are turning less to religion during times of difficulty and turmoil.

“In the absence of contact with a diverse and robust religious community … young people are starting to tell themselves a story that isn’t necessarily factually true about religious people,” Packard said.

This does not mean young people have no interest in religious or faith-based questions, he said. Rather, the survey results indicate they are more interested now than ever, but they are looking to have longer-term conversations about these questions instead of large religious experiences.

Brief moments of intense religious experiences, like summer camps and mission trips, are still important, but they are linked through a longer conversation about faith, Packard said.

Some religions have strong models for these longer conversations, such as Accompaniment in the Catholic faith, he said. However, many religious structures are not built for this type of engagement.

“The central components of divine and unconditional love or mercy or grace — these are concepts [young people] can know about, but they are not experiences they have necessarily had,” Packard said. “What they’ve been telling me is that those relationships are really critical because that’s where they get the experience of God … that’s what we really need to be focused on.”

These engagement trends have been forming for many years, but the pandemic exacerbated the problem, he said.

“2022 feels more like what we thought 2030 was going to look like,” he said. “Those patterns of disconnection were, in some ways, forced into people’s lives.”

The pandemic forced young people to focus on many variables — whether their prom will happen, if they will get to graduate, what the next year will look like — that they have seemed to turn away from spirituality, which is something they feel they cannot control, said Jim Stuck, Young Life Mountain West Region associate regional director.

In isolation, fear can become people’s friend, Stuck said. When people were not in community because of the pandemic, it altered opinions about religion. Young people were not able to have important conversations face-to-face.

“We have to recognize and celebrate these students and kids because of the amount of variables they have to walk through … but they still show up,” he said. “There is a fragileness to them, but there’s also a lot of strength that we have to celebrate.”

Packard said he has observed religious leaders working harder now than ever to engage young people, which has led to burnout. This is partly because they are using methods that worked previously but no longer work in the current pandemic environment.

“We’re not dealing with a deficit of care,” he said. “This is a real opportunity for those who work so hard and care so deeply for young people to rethink how we’re working to be more effective.”

Stuck said Young Life leaders have tried to creatively adapt to the altered sense of community. One group of leaders, for instance, dropped off cake boxes and decorations at students’ houses for them to decorate on Zoom. They are also focusing more on smaller gatherings with two to three students.

In other organizations, online settings worked well to build community. More people came to online services than expected, Rabbi Elizabeth Goldstein said. That engagement seems to have extended to in-person settings within the Jewish community at Gonzaga University, where Goldstein is a Jewish chaplain.

Packard said they tried to survey a sample of young people that is diverse and representative based on the 2020 census. Of all the participants in the study, 130 reported they live in Washington State, and 2,456 live in the Western U.S.

Previous Growing up Multi-Denominational
Next “Be like Jesus”: Spokane residents rally for abortion, reproductive rights