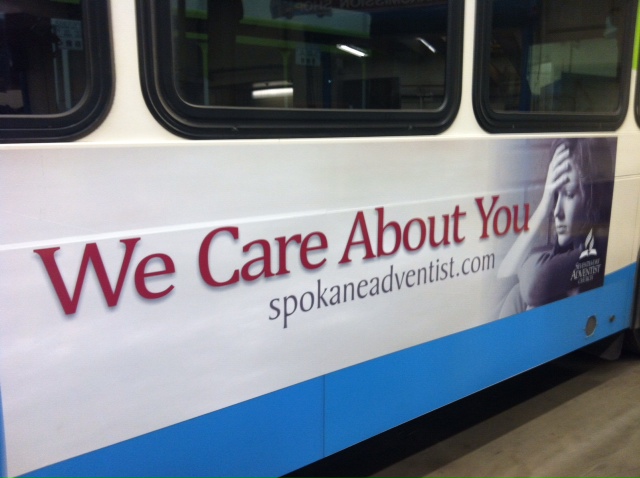 The ad has left some scratching their heads. Are religious organizations allowed to advertise on public transportation?

In 2011 the United Coalition for Reason bought ads on Spokane buses that read, “Are you good without God? Millions are.”

National Director Fred Edwords said Spokane officials didn’t really give the organization any trouble — not compared to other cities.

“There was some initial resistance from the bus company,” he recalled, but nothing a few phone calls couldn’t fix. “It’s freedom of speech, it’s religious liberty and it’s the public market place of ideas. People should be exposed to choices.”

And bus ads, he added, are a lot less invasive that knocking on doors.

Ted Carroll, principle owner of Ooh Media Spokane LLC (Out of Home Media), the advertising vendor for the Spokane Transit Authority, said there are strict guidelines on what can be advertised on the city’s public transportation. It won’t advertise firearms, alcohol or political campaigns, for example.

But when it comes to religious organizations, STA follows guidelines similar other cities, Carroll explained.

“This ad isn’t promoting a philosophy. If it were to, I would deny it (the ad),” he said. “It's just a general message. It’s not saying come to our church. It’s saying people care about you, that’s all it's saying.”

Gonzaga Law Professor David K. DeWolf said the city selling ad space on its buses to religious organizations is not different than it selling ad space to businesses, like Coca-Cola or Pepsi.

“Everybody recognizes that they’re making money by selling ad space,” he said. “They’re not endorsing Coca-Cola (for example).”

He said government officials can choose not to sell to religious institutions, but the rule would have to apply to all religious organizations. The city couldn’t sell to Adventists, but not atheists, for example.

Previous What is your image of God?
Next Four reasons Christians should support a pathway to citizenship