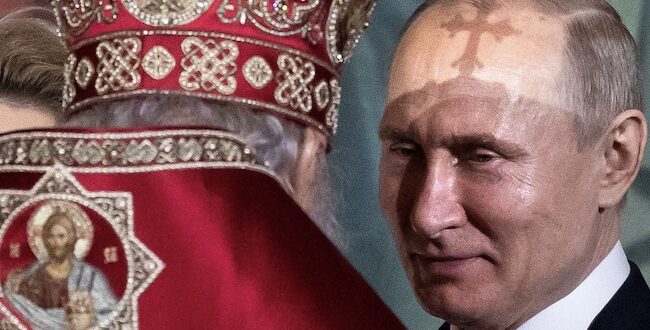 Religious nationalism and the invasion of Ukraine

Religious nationalism and the invasion of Ukraine

Is Russia’s invasion of Ukraine a religious crusade?

“I think the president of Russian Federation is making it a religious war,” Archbishop Daniel of the Ukrainian Orthodox Church in the U.S. told an interviewer for Religion News Service last week. That view is shared by John Schindler, a retired U.S. intelligence officer and historian with expertise in Eastern Europe, who argues that it was the establishment of the Orthodox Church in Ukraine separate from the Moscow patriarchate in 2019 that caused Russian President Vladimir Putin to invade.

The argument goes basically like this. Putin has wrapped his ambition to restore the Russian empire in a revived Russian Orthodox Church, long stifled by Communist hostility to religion. He considers Ukraine to be Russian heartland, spiritually as well as territorially.

After the 2014 Maidan revolution, in which the pro-Moscow president of Ukraine was ousted by protesters, deprived him of secular authority over the country, the establishment of an independent Orthodox Christian Church in the country, approved by Ecumenical Patriarch Bartholomew I in Istanbul, was the last straw. Ergo, the invasion.

This seems to me to overstate the case. The Biden administration’s badly managed withdrawal from Afghanistan, the rise of a pro-Russian right in Europe and North America, and the dislocations of COVID-19 all gave Putin other reasons to imagine that the time was right to force Ukraine back into the Russian orbit.

But there can be no doubt that, under Putin, the Russian Orthodox Church has resumed its czarist role as an arm of state policy. This political religion — call it Russian Orthodox nationalism — has served not only to advance Putin’s goal of suppressing liberal democratic dissent at home but also to win the admiration of the pro-Christian right in Europe and America.

Writing nearly a century ago in the wake of the bloodletting of World War I, the eminent Columbia historian Carlton Hayes attacked what he called “a new religious syncretism, by virtue of which very many persons continue nominally to adhere to the faith of their ancestors and even to practice its cult, whilst they adapt it to the exigencies of nationalist worship and discipline.”

The flaunting of Christian imagery and language by those who stormed the Capitol on Jan. 6 is a prime example of such syncretism.

More than half a century ago, in the throes of the Vietnam War, the eminent Berkeley sociologist Robert Bellah praised what he called “the American civil religion” as “not the worship of the American nation but an understanding of the American experience in the light of ultimate and universal reality.”

Hayes, a devout convert to Catholicism, acknowledged that “to condemn nationalism because it depends on religious emotion would seem to me as futile as to condemn vegetation because it thrives on sunlight.” Bellah, a devout convert to Episcopalianism, understood that “(w)ithout an awareness that our nation stands under higher judgment, the tradition of the civil religion would be dangerous indeed.”

The engagement of religious emotions, ideas and ceremonies in national identity comes down to cases. At its best, as in Lincoln’s Second Inaugural Address, it can give a nation a deeper understanding of itself and help make it whole. At its worst, as in the Jan. 6 assault, it can undermine a nation’s very foundations.

In the Russian invasion of Ukraine, we see it at its crusading worst.

Visit My Website
View All Posts
Previous Supporting Transgender Youth is Love, Not Abuse
Next What’s In A Name?