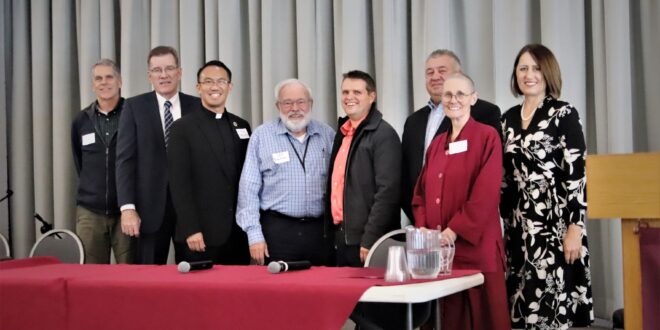 Different faith communities came together on Tuesday to promote religious freedom and tolerance at an inaugural interfaith event organized by leaders of The Church of Jesus of Christ of Latter-day Saints (LDS) and two Salvation Army volunteers.

LDS Spokane Stake President Darrell Moseley and his region’s new communication director, Jennifer Hicks, came up with the idea to organize a group of diverse faith traditions to stand up for religious liberty for all and to promote tolerance between faiths.

Hicks said the idea grew even more after speaking to the Rev. Ian Robertson, a retired pastor, and his wife, Linda, both of whom volunteer at Salvation Army Spokane Citadel Corps, where the event took place.

“Religious freedoms [are] really under attack in the country, and we need more and more individuals from different churches and different faiths to come together,” said Moseley.

A story of religious persecution

The event opened with Alexander Kapriyan, pastor of the Pilgrim Slavic Baptist Church, who spoke about his religious persecution in the Soviet Union and his escape to America 33 years ago.

He shared how when he was in grade school, he decided to raise his hand when the speaker at a large school gathering asked if anyone believed in God, knowing it was not going to end well. Afterward, he and another boy, who also raised his hand, were “jumped” by other children and beaten badly.

As his faith grew, so, too, did his and his family’s persecution, which eventually included his wife and their nine children. When there was a path to leave Russia, he took it.

“When we arrived in the United States, I thought, I’m really in paradise,” said Kapriyan in his nearly 30-minute message. “Everybody’s Christian, everybody’s smiling, everybody’s happy, churches are full of people … I couldn’t believe that there’s such a great nation.”

Even though he continues to enjoy his religious freedoms in the U.S., he sees them diminishing,

“I feel like we have some things to worry about. Step by step, little by little, inch by inch we are losing our freedoms,” said Kapriyan.

The second part of the event featured five panelists to discuss this loss of religious freedom and tolerance among faiths.

The panelists were Moseley with the Church of Jesus Christ of Latter-day Saints; Venerable Thubten Chonyi with Sravasti Abbey; the Rev. John Repsold of Mosaic Fellowship; the Rev. Joe Reeves of North View Seventh-day Adventist Church; and the Rev. Kyle Ratuiste, director of vocations at the Catholic Diocese of Spokane.

Robertson moderated the conversation and first asked the panelists in what ways are they pushing back on the “anti-faith movement” growing in the U.S., using COVID-19 restrictions placed on churches as an example of that “anti-faith” sentiment.

Most of the panelists mentioned Jesus Christ and his Gospel in some form as the answer to how they are pushing back on the “materialistic and secular culture,” a description given by Ratuiste in his response to this question.

Speaking from the Buddhist faith tradition, Chonyi said that while they respect Jesus Christ “profoundly” as a teacher and a guide, “that is not our pathway to salvation.”

She added that the Jewish and Islamic traditions, also have their own ways “of approaching fundamental values of love and ethical conduct, which is, unmistakably, so lost and shaken in our society right now.”

“One of the values I think that Sravasti Abbey or the Buddhist community in general brings to this topic right now, is that we invite all comers,” said Chonyi. “So it is a place that’s different from anybody on this panel. But I feel like it holds a very strong position if we’re going to have an interfaith discussion to hold the space for those places for people to find spiritual support that may or may not be within what has been the mainstream of this country.”

The panelists then shared examples of religious intolerance they have experienced or seen in the community. Examples included swastikas and profanity spray painted on Temple Beth Shalom, Morning Star Baptist Church and the LDS Spokane Stake Center building on 29th Avenue on the South Hill.

Repsold also experienced intolerance toward his faith personally. While serving on a Spokane Public School District Board subcommittee, he was told sharing his values in terms of his faith was not welcome.

“[It] made me very aware that you cannot bring your faith into the discussion,” said Repsold. “You can bring your values, but they must be declared in a secular framework.”

Christian nationalism rallies taking place in our communities that aim to define the U.S. as a place for only Christians is also a concern in limiting religious freedom for all, said Chonyi.

Near the end of the panel discussion, Reeves elaborated on that idea, warning against the temptation for the church to move toward a religious tyranny in response to secularism.

“There can be a tendency historically when the Christians have felt wounded or down when they gain control [they become] the intolerant ones,” said Reeves. “So, in times when we are pushing back against secular tyranny, we need to check ourselves along the way that we don’t develop religious tyranny because that can be just as ugly if not worse.”

Hicks said they plan to have another gathering to keep this discussion going in about six months.

Moseley reflected on the event in a conversation with SpokaneFāVS, afterward.

“Like the one sister (Chonyi) talked about today about, we’re all in this together, and it’s about love,” said Moseley. “It’s not so much about our faith, because we’ll argue all day long about that. But when we’re just talking about being able to worship the way we want to, that’s under attack. It’s under attack, not just for us, but everybody else, too. And we need to come together and fight these things.”

Previous UI abortion memo needed to be handled differently
Next Sacred Texts: The Book of Mormon, Keystone of My Religion