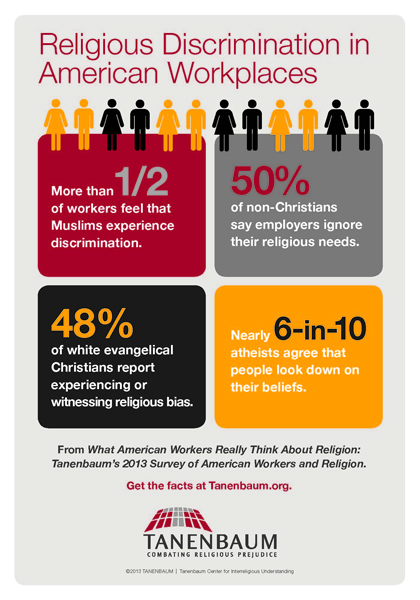 Religious diversity is increasing at the office, and so are pitfalls

The American workplace, like the rest of U.S. society, is becoming more religiously diverse and that is raising concerns about employer accommodations for believers — and increasing the odds for uncomfortable moments around the water cooler.

Yet one potential flashpoint among workers does not involve new immigrant faiths but rather two indigenous communities: white evangelicals and unaffiliated Americans who constitute one of the fastest-growing segments of the population.

A major factor contributing to workplace conflict, according to a survey released on Friday (Aug. 30), is that evangelicals — whose religious identity is tied to sharing their beliefs — are much more likely to talk about their faith at work than other religious and nonreligious groups.

In fact, half of white evangelical Protestants said they share their beliefs with co-workers, compared to 22 percent of workers overall, according to the 2013 Survey of American Workers and Religion, sponsored by the Tanenbaum Center for Interreligious Understanding.

And one-third of evangelicals said they discuss religion frequently, compared to 14 percent of non-Christian believers, 10 percent of Catholics and 7 percent of white mainline Protestants. Moreover, nearly 9-in-10 white evangelical employees say they are somewhat or very comfortable when the issue of religion comes up in the workplace.

Conversely, the research found that nonbelievers are reticent to discuss religion and 43 percent of them say they feel somewhat or very uncomfortable when the topic comes up.

“This suggests the potential for workplace clashes between atheists and evangelical Protestants,” the report says.

The survey, released for Labor Day, was conducted in March and April by the Public Religion Research Institute, which questioned more than 2,000 American adults in both English and Spanish. The poll has a margin of error of 2.8 percentage points.

“There’s a clear sense in the data, especially among white evangelicals, that other workers’ needs are being taken care of and theirs are not,” said Robert P. Jones, head of the Public Religion Research Institute.

Jones added that along with their growing numbers, the “nones” are also increasingly confident in proclaiming their lack of religious affiliation, which in turn contributes to the potential for workplace interactions — and conflicts — over religion.

David Sikkink, a sociologist of religion at the University of Notre Dame who reviewed the report, also noted that while most believers — as well as nonbelievers — don’t look to the office as a place to find meaning and direction in their lives, evangelicals often take the opposite view and see the workplace as a venue for living out their religious identity.

“Evangelicals want to be different somehow, to take a stand, and to show that God is working in their lives through them,” Sikkink said.

He said that does not always mean sharing the specifics of their faith, but can instead be demonstrated by the way evangelicals deal with workplace problems, or simply in their focus on developing friendships with their co-workers. Still, the endpoint of such relationships is a conversation about faith, “and eventually that may rub the nonreligious the wrong way.”

Overall, the incidence of workplace conflicts and discrimination over religion seems to be a fairly significant issue, according to the survey, with one-third of respondents reporting that they have seen or experienced incidents of religious bias in the workplace.

The most frequently cited problems were not interactions with co-workers but instead related to a failure of companies to provide sufficient accommodations for believers, especially non-Christians. Half of those respondents said that their employers are ignoring their religious needs.

Among the other findings: