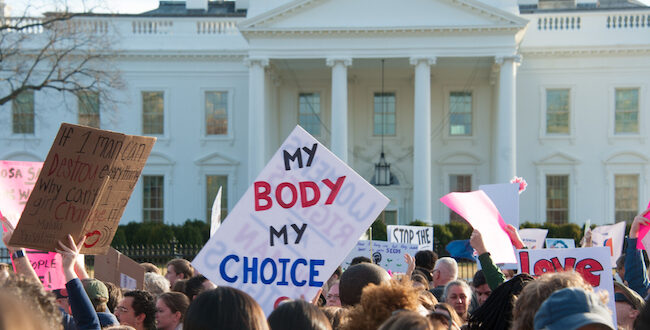 Many have claimed the Republican Party has become a religious party, not a legitimate political party. They also maintain that the conservative Supreme Court the GOP has fought so hard to establish has become a theocratic tribunal.

In an article entitled “Curtailing Abortion Rights Undermines Religious Freedom,” Muslim writer Fatima Argun and Jewish author Walter Ruby declare, “The Court’s striking down of Roe v. Wade appears as nothing less than a Christianization of American law, which is perceived by our minority faith communities as a peril to the principles of religious pluralism and governmental neutrality.”

In June, 2022, Barry Silver, a rabbi and civil rights attorney, filed a suit against Florida’s new abortion law, which bans abortions after 15 weeks. He claims this law violates his freedom to practice Judaism according to his own beliefs.

Silver argues that the law, which was announced in an evangelical church, imposes “the laws of other religions upon Jews.” He and many other Jews believe that the fetus is not a person until it draws its first breath (Gen 2: 7), so abortion is, according to Silver, not murder.

Silver and his co-plaintiffs (a doctor, four clergymen, and a pro-choice woman) argue that the law, in addition to violating Florida’s Religious Freedom Restoration Act, also violates privacy and due process rights.

The doctor, obstetrician-gynecologist Daniel N. Sacks, contends that the Florida law undermines his duty to give necessary health care. He states: “Government interference based on the religious beliefs of some and has no place in medicine.”

Many doctors have correctly maintained that pregnancy itself is a greater threat to a woman’s life than an early abortion. The U.S. has the highest maternal death rate among its peer nations, and Black women are three times more likely to die in child birth.

Jewish law always favors the mother’s life, which is also the position of English common law, which allowed abortion to save a woman’s life at any point in pregnancy. Jewish law also allows abortions in case of psychological and emotional conditions.

Eliezer Waldenberg, a renowned scholar of Jewish law and medicine, writes that “severe psychological distress is as much of a legitimate reason for an abortion as severe physical distress.”

In Louisiana, a woman is being forced to bring a skull-less fetus to term. Her doctor, Valerie Williams, said her patient was “screaming—not from pain, but from the emotional trauma she was experiencing.” Under Jewish law this woman could have had a safe, quick, early abortion, which would have ended the life of a non-viable fetus.

In September, 2021, a 30-year-old Polish woman in medical distress died of scepsis because her fetus still had a heart-beat. Thousands of protesters chanted: “Her Heart Was Beating, Too.” A similar case in Ireland caused so much outrage that the people, by referendum, repealed a restrictive abortion law.

Argun and Ruby correctly state that not all Christians believe that the fetus is a person from conception on, and that the Supreme Court and anti-abortion red states are adopting “values held by a limited segment of our Christian population.”

The Supreme Court ignored, at its peril, an amicus brief that warned that abortion bans “stifle the diversity of views within and across religious traditions on the morality of terminating a pregnancy.” I predict that religious discrimination lawsuits will be filed in many other states.

After the decisive vote against the anti-abortion initiative in Kansas, two other states have decided not put the issue to the vote of the people. Legislators in Nebraska could not get enough votes to proceed on a bill, and the governor of West Virginia rejected the idea of a state referendum such as the one in Kansas. Republicans fear the voice of the people.

Anti-abortion bills in Montana and Idaho have been upheld by state courts, but those decisions can be appealed to higher courts. Anti-abortion legislation in Missouri, Louisiana, South Carolina, and Utah has been stopped appending appeal.

After chasing the pro-choice car for years, the anti-abortion dog has now caught his prize. He may live to regret his momentary victory. He appears not to realize that there are, in many states, majority pro-choice votes there. He will soon slink back to his yard and sulk.