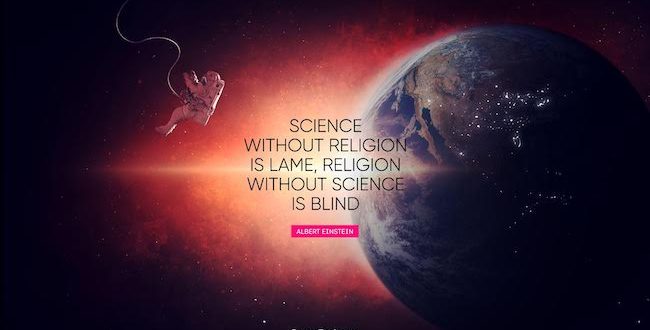 Science and religion graphic by quotesbook.com

Although Islamic societies lag behind current scientific achievements of the West, Islamic civilization “was once the unrivaled center of science and philosophy…while Europe was mired in the Dark Ages.” The science developed and practiced during the Islamic Golden Age (about 786-1258) included astronomy, mathematics medicine, chemistry, botany, agronomy, geography, ophthalmology, pharmacology, physics, and zoology.

These advancements “had a pervasive influence on the European Renaissance.” With Islam’s northward advance during the 8th and 9th centuries, and later with the Crusades and trade, “Europe benefited heavily from the Islamic Empire’s progressive thinking.” Those benefits included the scientific method and modern university systems. The Wisdom Fund notes,“we have underestimated the importance of 800 years of Islamic society and culture in Spain…”

As European scientists adopted some of these methods, they ran into persecution from Christian churches. The classic dispute was whether the universe of the Middle Ages was geocentric or heliocentric. This is probably where the modern dichotomy between science and religion arose. It didn’t spring from Islam.

Scientists sometimes claim that religion should not influence “objective” scientific observations. Yet, an entire field of “research ethics” addresses “moral issues that arise during, or as a result of, research activities.” Where might these ethics come from, if not from religion? No overarching ethos guides science.

This begs a deeper question. Usually a scientist can’t predict what her research might be used for; other creative minds may discover applications undreamed of. Not so with the Manhattan Project, which developed the atomic bomb: its purpose was clear. A month before the first bomb was dropped, “some of the Manhattan Project’s leading scientists tried to beseech President Harry S. Truman to call off the bombings.” During WWII, some German scientists vowed to “rise like one man to protest” the Nazi dismissal of their “non-Aryan” colleagues. But they didn’t.

Can religion and science cooperate?

Both seek truth, but our understanding of truth changes as knowledge improves. Science seeks to disprove hypotheses built on evidence, current scientific “truths.” Scientists design experiments to test those hypotheses. If we fail to disprove them, hypotheses are generally, over time, accepted as “laws.” New evidence can overturn those laws.

Religion functions similarly, though not as rigorously. Religious guidance, promulgated by religious teachers, bring the Creator’s laws for people of a particular time and place. Baha’is call such prophets “manifestations of God” because they speak on behalf of God, Many of God’s laws are immutable, such as the first two commandments, reiterated throughout religious history. Other laws change as civilization advances, often through increased scientific understanding and achievement.

Science and religion complement each other. Both seek, and purport to tell, truth. If conflict exists, either the religion is superstition, or the science is error. Ultimately such conflicts will be reconciled.

Last century Baha’u’llah addressed the clergy: “O leaders of religion! Weigh not the Book of God with such standards and sciences as are current amongst you, for the Book itself is the unerring Balance established amongst men.”

Expanding on this, Baha’u’llah’s son ‘Abdu’l-Baha explained the unity of science with religion: “We may think of science as one wing and religion as the other; a bird needs two wings for flight, one alone would be useless. Any religion that contradicts science or that is opposed to it, is only ignorance—for ignorance is the opposite of knowledge.”

Religious belief “not conformable with scientific proof and investigation is superstition, for true science is reason and reality, and religion is essentially reality and pure reason.”

‘Abdu’l-Baha also also explained, “the two must correspond. Religious teaching which is at variance with science and reason is human invention and imagination unworthy of acceptance, for the antithesis and opposite of knowledge is superstition born of the ignorance of man. If we say religion is opposed to science, we lack knowledge of either true science or true religion, for both are founded upon the premises and conclusions of reason, and both must bear its test.”

The implications for establishing a peaceful civilization are clear: “If religion were in harmony with science and they walked together, much of the hatred and bitterness now bringing misery to the human race would be at an end.”

Previous Where We Gather: St. Gertrude’s Monastery
Next Racial Understanding in Fits and Starts