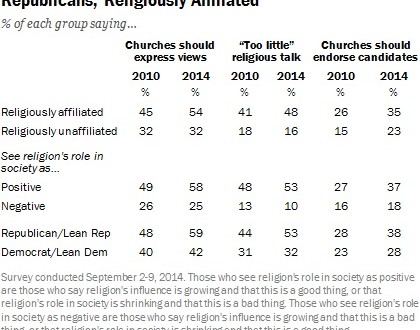 Religion loses clout: Why many say that’s a bad thing 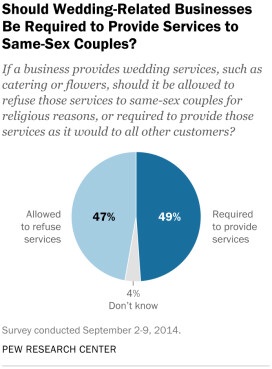 (RNS) More Americans today say religion’s influence is losing ground just when they want it to play a stronger role in public life and politics.

A new Pew Research Center survey finds 72 percent of Americans say religion’s influence is declining in society — the highest percentage since Pew began measuring the trend in 2001, when only 52 percent held that view.

“Most people (overwhelmingly Christians) view this as a bad thing,” said Greg Smith, associate director of Pew’s Religion & Public Life Project. “That unhappiness may be behind their desire for more religion and politics.”

Growing numbers want their politicians to pray in public and for their clergy to endorse candidates from the pulpit. And nearly half of Americans say business owners with religious objections to gay marriage should to be able to refuse wedding-related services to same-sex couples.

There are three ways to look at the findings, released Monday (Sept. 22): More Americans say amen to mixing faith, politics

Just as campaigns ramp up for the 2014 mid-term elections:

– 49 percent want churches and other houses of worship to “express their views on day-to-day social and political issues,” up from 43 percent in 2010.
– 41 percent say political leaders today show “too little expression of religious faith and prayer,” up from from 37 percent in the last mid-term election. “People still see religion as one of the foundational sources of morality. They still want to see that in their leaders,” said John Green, professor of political science at the University of Akron and senior research adviser for the Pew Research Center.
– 32 percent support clergy endorsing candidates from the pulpit. That’s a jump from 24 percent in 2010 although nearly twice as many — “63 percent, including some highly religious people — still say ‘No, no, no,’” Smith said.

“It’s a surprising reversal of trends,” Smith said. In 2010, 52 percent said churches should keep out of politics.

People stick to their corners

Party identification and social attitudes “are becoming even more polarized between people who identify with a religion — mostly Christians — and those who claim no religious label (the “nones”) said Smith.

There is discontent and divisiveness within each of the two political parties, but not enough drive people to jump the fence.

Democrats are split on whether their party is too liberal or not liberal enough. Republicans, particularly white evangelicals, say their party is not conservative enough on resisting government spending, abortion, same-sex marriage and illegal immigration.

Even so, the survey finds no noteworthy change since 2010 in party preferences: 48 percent of registered voters identify with or lean to the Democratic Party and 43 percent favor the Republican Party. Most black Protestants and “nones” expect to vote Democratic this fall, while evangelical Protestants expect to vote for the GOP candidate in their district.

The public is almost exactly split on whether wedding vendors, such as caterers or florists, should be required to provide services to all clientele (49 percent) or be allowed to decline if they object for religious reasons (47 percent).

Those who said businesses should serve all clientele, included 61 percent of “nones,” 57 percent of Catholics and 59 percent of black Protestants.
Show caption

The U.S. Supreme Court declined to hear the case of Elaine Huguenin, co-owner of Elane Photography in Albuquerque, N.M., who had religious objections to taking photos for a same-sex wedding ceremony. Photo courtesy of Alliance Defending Freedom
This image is available for Web and print publication. For questions, contact Sally Morrow.

However, 71 percent of white evangelicals and 49 percent of white Protestant mainline faithful said wedding businesses should be allowed to refuse gay couples when owners have religious grounds.

The same people who support an opt-out for religious wedding vendors are also more inclined to say “homosexual behavior is sinful.”

Since May 2013 when Pew measured this question, bans on gay marriage have been overturned state after state. And the Supreme Court declined to hear a case brought by a New Mexico wedding photographer who refused on religious grounds to photograph a lesbian wedding.

The barrage of news headlines on these issues may have contributed to an uptick in the number of people overall who say homosexual behavior is sinful — 50 percent now, up from 45 percent last year.

Still, in 2003, Smith noted, 55 percent called gay activity sinful. It’s too soon to know if the 2014 findings on gay marriage are an anomaly or the first sign of a change in direction for public attitudes.

More Difficult to Be Religious in the U.S.? graphic courtesy of Pew Research Center.
This image is available for Web publication. For questions, contact Sally Morrow.

Fewer people say the Obama administration is “friendly toward religion” (30 percent) than said so in 2009 (37 percent). Yet that could be irrelevant in the mid-term elections.

Religion overall is less prominent and less controversial than it was 10 or 15 years ago, said Smith. He cited examples in previous elections where contentious religious issues made headlines — and no difference at the polls.

John Kerry, an abortion rights Catholic, didn’t lose the presidential race in 2004 because some bishops said they would refuse to give him Communion.
George W. Bush’s controversial first-term faith-based social service initiatives had nothing to do with his re-election.
Obama won two terms despite a persistent cluster of voters who insist he’s secretly Muslim.
Evangelicals set aside suspicions about Mormons to vote in droves for Mitt Romney in 2012.
Religious worldviews are deeply ingrained and they are not easily overridden by news events, said Smith.

“Social issues such as birth control, abortion and gay marriage are consistently at the bottom of the list of what’s most important to voters,” said Jessica Martinez, a Pew research associate. “There’s no evidence these will be deal breakers now.”

The survey of 2,002 U.S. adults was conducted Sept. 2-9 on cell phones and landlines. The margin of error is plus or minus 2.5 percentage points.