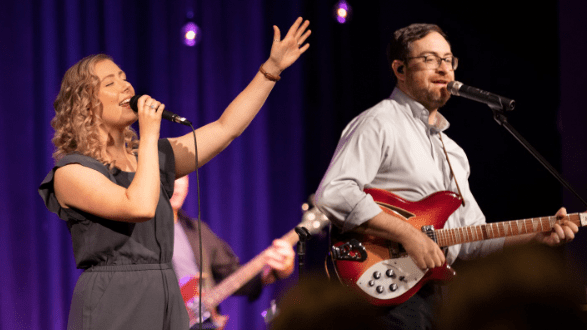 In line with national trends, most congregations in Spokane County are in decline, except for the nondenominational church, which showed a 240% increase in worshipers over the last decade.

“There’s certainly a lot of new people coming in,” he said. “Even in the middle of COVID we helped plant two churches.”

On a typical Sunday morning about 800 people worship at Faith Bible Church and Jarms said on any day of the week there could be up to 400 cars in the parking lot.

He added that he’s part of a local nondenominational pastor’s fellowship and many in that group agree their congregations are “healthy and vibrant.” Several, he said, are also planting churches.

“We take the promise from Jesus in Matthew 16:18 to Peter…Jesus promised he’s going to have his churches be alive and well and thriving as long as they are speaking the message of the Gospel,” he said. “I just believe that promise. I’m not a very good speaker, not very charismatic, I don’t know why we’re growing, but I do know people are fed, they have hope in the message Jesus gives…Jesus is doing something and I can’t explain it.”

He added that mainline churches, which are shrinking, are perhaps trying too hard to be in sync with the culture by dismissing Scripture they consider to be “out of date.”

Scott Thumma, director of the Hartford Institute for Religion Research, who counted independent churches for the census, said one of the reasons he believes the nondenominational church is booming is because there’s no image associated with it.

“If you say you’re Southern Baptist (for example), people have a picture of what that is…If you say you’re Pentacostal, or Assemblies of God, it can come with negative baggage in many cases,” he explained.

Some denominationally-affiliated Evangelical churches in Spokane, as well as mainline churches, are shrinking in the Spokane area.

For instance, Southern Baptist adherents dropped by nearly 34% and the Episcopal Church fell by about 47%.

Episcopal Bishop Gretchen Rehberg said it’s true the church has shrunk, but said data from the Diocese doesn’t show such a severe decline as the U.S. Religion Census.

“Frankly getting the mainline message out has been difficult. The extremes of the evangelical fundamentalist churches make better news for those who sell it,” she said. “So the common perceptions of Christians being anti-intellectual, anti-science, anti-gay – none of which are true at all for the Episcopal Church – well most folks who watch the news or read the paper or get their news from social media might not know that. Frankly if my only options were that way I would stay home as well.”

She added that she’s not worried about the church dying, noting that the message of the Gospel will not die.

According to the U.S. Religion Census The Presbyterian Church USA had a 37.5% drop in adherents in Spokane. Like Rehberg, she said in-house data shows less of a decline than the census.

“The trajectory for most of our churches is showing a decline but at the same time we’re seeing the work of the Spirit and some super exciting new expressions of Church—such as: Feast World Kitchen, Side by Side and Growing Neighbors,” she said.

These are growing community-based ministries.

Other notable findings from the study were a sharp drop in Catholic worshipers, which showed a 46.5% dip in adherents, and a sharp rise in Hindu worshipers. The Catholic Diocese of Spokane was unable to be reached for comment.

The census shows more than 800 Hindus adherents in the county. Himani Agrawal of the Spokane Hindu Temple and Cultural Center said this figure likely includes children and said the Indian community is growing, but the number of worshipers each week remains modest.

She said because Spokane is growing, it makes sense that the Hindu community is also seeing growth.

“Spokane is not rich in diversity, but people are open minded, so that to me is a factor,” she said.

Previous Visiting Spokane’s Synagogue
Next The World Federation of Trees

Confessions of a Denominational Snob - SpokaneFāVS

[…] and challenged my snobbery. I wasn’t surprised to learn that in Spokane, as elsewhere, “Religious Census Shows Nondenominational Churches Thriving, Others Shrinking.” Nor was I surprised that — according to “Are We Entering a ‘Post-Denominational […]