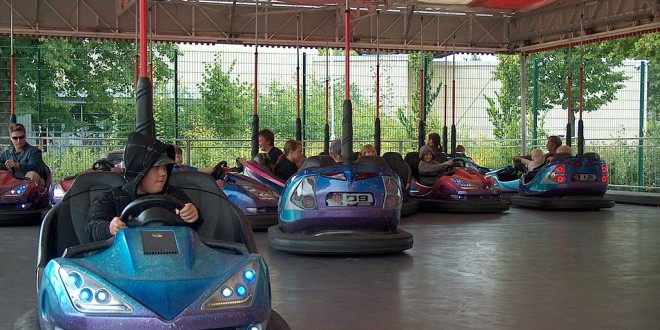 My dear wife was not happy with me! We had three small kids requiring three adults if the rug rats were going to get to ride the bumper cars. I gave her the look, “You really don’t have a choice.” She gave me the look, “This was your idea, and I’m not too thrilled about it!”

But if the grandkids were to ride, she had to ride. Not one of her happier moments. Honestly, being pounded over and over again by other bumper cars while traveling in a dizzying circle in an obnoxiously loud room isn’t all that fun. Go figure. But sometimes you do what you gotta do.

I did my best to avoid her car. One bumper-whack from me would have really put me in the doghouse. I kept smiling at her. She kept glaring at me. Whose idea was this?

I can be such an idiot.

As the ride ended, I was not feeling too well. I get motion sickness pretty easily. I was a little woozy and wishing I hadn’t eaten so many fried clams for lunch. I had a camera in one hand (to capture the Kodak-moments), and I was attempting to get out of the car with the other while helping my 4-year-old riding partner out as well.

That’s when my whole world turned upside down. Somehow I managed to catch my foot on something as I was climbing out of that evil contraption. My other foot slammed against the top of the car (that hurt!), and then I ended up on my butt sprawled out on the middle of the floor like a cracked egg in a frying pan. I was in pain. Embarrassed. Feeling very old and foolish.

My family thought I was kidding and just being theatrical. I wasn’t. Again, the thought flashed through my mind, “WHOSE IDEA WAS THIS ANYHOW?!”

I desperately wanted to blame somebody. Anybody. I wish I could have blamed my wife. Why is it that we tend to try to shift the blame when things go boom, and we get hurt? Why do we struggle to accept responsibility for our own predicaments?

To my wife’s credit, she didn’t say, “I told you so.” She didn’t enjoy the ride, but she also didn’t enjoy seeing me get hurt or embarrassed either. I wouldn’t have blamed her if she laughed at me with just a smattering of pleasure as I limped off. She didn’t.

My wife is a lot like Jesus. He won’t throw your past mistakes in your face. He finds no joy in seeing you get hurt. He never laughs at you when you’re down. His only hope is that you will grow and learn from your failures.

So the next time you fall out of a bumper car or do something just as dumb, remember: What happens next is up to you.

Kurt W. Bubna published his first book, "Epic Grace: Chronicles of a Recovering Idiot," with Tyndale in 2013. He has recently published "Mr. & Mrs.: How to Thrive in Perfectly Imperfect Marriage" and two other books. Bubna is an active blogger, itinerate speaker, regular radio and television personality, and the Senior Pastor of Eastpoint Church, a large non-denominational congregation in Spokane Valley, Wash. He and his wife, Laura, have been married for nearly 40 years and have four grown children and six grandchildren.