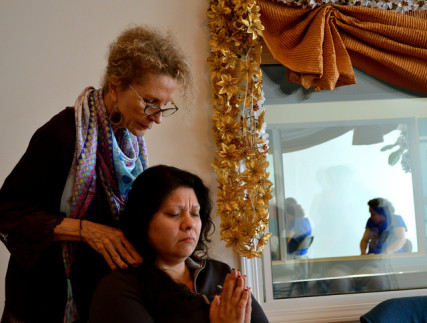 CHATSWORTH, Calif. (RNS) Sandra Delgado wasn’t held much as a child growing up in a stern, Catholic, Mexican-immigrant home in the San Fernando Valley.

A high-stress job and spiking blood pressure led her to discover the healing power of human touch a year ago when she walked into her first Reiki session.

“Reiki saved my life,” said Delgado, a lawyer with Bank of America. “I cannot live without it and I don’t want to know what would have happened to me if I hadn’t found it.”

A spiritual touch practice based on the notion that human hands can redirect one’s “life force energy” to heal stress and disease, Reiki is the hottest new Eastern healing practice making its way into the Western health industry.

Like acupuncture, yoga and other once fringe practices, Reiki is now viewed by many as an effective, accepted alternative practice in mainstream America, where at least 1.2 million adults have tried the energy healing therapy.

But for a relatively safe and side-effect-free treatment, Reiki has garnered quite a conflicted reputation among health researchers and medical professionals and in the Roman Catholic Church.

“Overall there is a lack of high-quality research on Reiki, and the studies that have been done show conflicting results,” a National Institutes of Health report found.

Findings also conclude that there is “no scientific evidence to prove that such energy exists,” writes John Killen from the National Center for Complementary and Alternative Medicine.

Yet, the energy healing is being woven into patient services and treatment programs for people with cancer, fibromyalgia, pain and depression. American consumers like Delgado have been paying out of their own wallets for Reiki, which can range from $40 to $300 a session, creating a new touch therapy market that hospitals, medical and cancer centers are tapping into.

“People come to me when nothing else is working,” said Marydale Pecora, founder of Param Yoga Healing Arts Center in Chatsworth and a longtime Reiki master who works with Delgado and hundreds of others. “It’s a last-ditch effort to get relief from a medical challenge and to restore balance.”

More than 60 U.S. hospitals have adopted Reiki as part of patient services, according to a UCLA study, and Reiki education is offered at 800 hospitals.

The Healing Touch Professional Association estimates that more than 30,000 nurses in U.S. hospitals use touch practices every year. Pecora said hospitals now seek out Reiki masters and do workshops to train nurses and medical staff. More medical professionals are signing up and paying about $175 to go through Reiki levels 1 and 2, she said. Training programs to become a Reiki Master Teacher last six months to a year and cost $875.

Yet many medical experts question Reiki’s lack of regulation, especially in a hospital setting.

Reiki critics call the practice “quackery” and unable to ameliorate symptoms of serious diseases. According to a 2009 article in The Journal of Alternative and Complementary Medicine,  “The serious methodological and reporting limitations of limited existing Reiki studies preclude a definitive conclusion on its effectiveness.”

In 2009, the U.S. Conference of Catholic Bishops issued guidelines that say “a Catholic who puts his or her trust in Reiki would be operating in the realm of superstition.”

The guidelines say it would be inappropriate for Catholic institutions, such as Catholic health care facilities and retreat centers, to offer Reiki.

Reiki participants lightly touch down on the body to give positive energy. Photo courtesy of Brianna Sacks

Despite the criticisms, Pecora said she can walk into all major hospitals in the San Fernando Valley to conduct Reiki sessions without anyone batting an eye.

“It just works,” she said. Pecora has been practicing Reiki since the 1980s, when energy healing was considered “unique, weird, and no one knew what you were talking about.”

At a recent Saturday afternoon Reiki share session, strangers gathered together to work out energy kinks.

Pecora quietly moved through the circle of folding chairs, conducting “attunements.” Her thin hands fluttered across people’s bodies. She blew on the crowns of heads and faces, her breath like steam, soft and odorless as participants focused on realigning and opening the energy channels.

But, she added, the medical center has plans to offer Reiki sessions because patients keep asking for it.

“Patients are much more demanding for these practices. It’s the reason why our whole department came about in conjunction with Western medicine,” said Vanessa Ortiz, the wing’s program director.

The hospital has a contract with a local Reiki master who comes once a week to conduct private sessions with patients. She charges $40, half her normal rate, and says she cannot wait until insurance covers her services.

Health insurance companies cover Reiki when it’s woven into comprehensive treatment programs such as physical therapy, massage or palliative care and delivered by a nurse or licensed care professional as part of routine care during a hospital stay.

But some expect this to change.

Delgado, the Bank of America litigator, sees another benefit to Reiki.

“We live in an electronic environment with no touching,” said Delgado. “Reiki takes us back to the basics of humanity.”

(Brianna Sacks is a journalism student at the University of Southern California.)

Previous Meat & Potatoes: Why are there denominations?
Next Poll: Americans stretch the truth on attending church