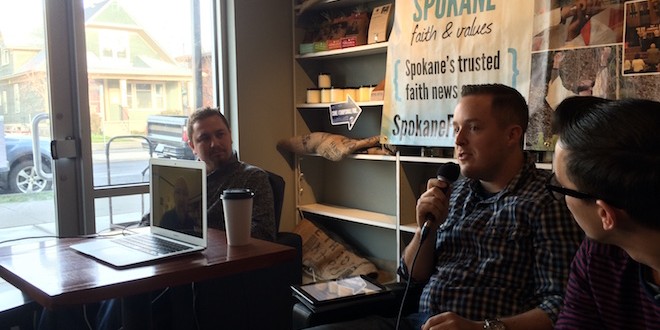 Reflections on the give and take of December’s Coffee Talk

The December Coffee Talk was full of issues to engage the mind of any one concerned with values in our troubled world. On the surface a lot of the talk seemed to concern the falling numbers in the institutions many of us value, as if that is what “a good Christian” or person of faith should be concerned with. At first I was dumbfounded, as if God, if there is a god, would be concerned with census data instead of the moral plusses and minuses of how we were relating to each other and the world which our Bibles tell us we’ve been put in charge. Maybe the falling attendance is a good thing. After all, I did not hear that day any discussion about why belonging to a church was more valuable than not; no discussion of the meaning and value of a redemptive community, or the benefit of liturgy for spiritual growth. After all, what is the event of falling attendance insisting that we address?  Oversimplifying, what does God really want? It might not be more people in churches, temples or mosques. Those may be passing institutions, good only for those who get paid for dispensing out a certain commodity.

Maybe the commodity does not fulfill our spiritual lives. I can belong to many enjoyable social groups.  I also could belong to (and do) a few of many activist groups all working for a better society and for individual support. And these memberships can happen without subscribing to the belief in a defunct cosmology and an intellectual paradigm that causes many policies to directly counter my basic values.

A couple of speakers did mention how there was a growing attendance among youth in religious groups who subscribed to spirit driven programs addressing the needs of the “least of these,” the poor, those without social position or support, and those without the ability of benefiting from their birthrights as children of god. I have left two churches, following my sons out the exits, because that church would accept my gay father-in-law only as a second class citizen.

If we do use the Nicene Creed as part of the liturgy many say it with no belief. For many youth it is hard to say without cracking up. Please note, Jesus, and therefore his history, story, message, and morality are relegated to a comma. All it tells us about him is that he was born and died. All else is the product of theo-metaphysics and theo-politics, ideas formed from twisting and adding to very common notions prevalent in many other Jewish sects at the time.

Maybe it is time that we stopped trying to attract more members by taking the old, much corroded concepts and putting them in new wrappings. Maybe we need to do a complete remake of the characteristics of God, the stories, and the theologies so they reflect what we now know of that time, of our present time, and our present knowledge. But only none as creeds or doctrines, or the truth. All must be suggestions drawn from our experiences of the event, none privileged. All are merely a “perhaps.” Many people of faith are trying, but piecemeal, without drawing any conclusions or picture that may threaten our beliefs.

Not only might such an honest undertaking better the spiritual development of many more citizens, it might make the church a leader, rather than a dead weight, in the many movements to save our civility and our devastated world.

Two notions, both rather orthodox, were put forth in the Coffee talk that I believe are preventing such an undertaking.  The first is his statement, misinterpreted as his telling us “we must believe in him;” the second is that he came to establish a new religion or church. These are important distinctions. Are we to believe in the hyper-personhood of Jesus rather than that Jesus was a perceptive man who had the inclination to speak out against the hypocrisy of the times in the tradition of the prophets of his faith? Do we let those  whom we know (“Q”, Thomas, and others like them) suggest what the life and sayings of Yeshua might have been? Or do we let others more distant who followed literary conventions and borrowings suggest stories and doctrines that  took the good prophet’s life and works, bending them to the writer’s timely purposes, adding culturalisms rather foreign to Jesus, molding the Jewish movement into a separate religion more acceptable to the Roman rulers? Must we imprison Jesus in a comma of rote belief, or can we blow up that comma allowing Jesus to stand before us, Christian or (choke) heathen with his radical and often mysterious message of love?

If we use the myths to tell us what the ideal, perfect God and changeless world restricts us to, we have and will continue to have serious policies that privilege some at the expense of others, that are so obviously unjust. And that injustice, being a perfect ideal created by a supreme and perfect creator, has to be followed because it is the reality the god’s perfect revelation tells us we must follow if we want to go to heaven.

We all felt we were in the New Kingdom, which Jesus talked a lot about, and not in our competing churches and religions, which Jesus had little more to say about than, don’t go there. Then, in New York of the ‘60’s, and at the Coffee Talk this December.

The value lessons of the Coffee Talk?  That we need to continually ask just what is it that the problematical event is calling for us to address. Paul said, “Pray without ceasing.” Is it God or our business oriented training that is calling? And how can we distinguish between Jesus’ take and the powers take on the movement that early focused on Jesus and later came to focus on what others, for their reasons, wrote about him. And what do we do when someone’s mistranslation is used to promulgate the belief that we are special, exclusive, and better than others, denying them full status equal to us as children of god.

Previous Christmas sing to be held Friday at St. Stephen’s
Next An Interfaith Defense of Donald Trump