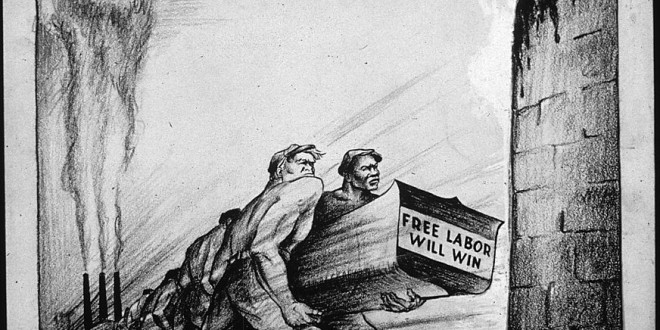 Rediscovering the importance of Labor Day

A depression swept the country. Five hundred banks closed down; 15,000 businesses failed. Unemployment rates in major cities reached 20 percent or more. No industry was left untouched. Families starved. This was the Panic of 1893. Amidst the chaos, workers found themselves having to fight for every last penny. In a small company-town in Illinois, more than 3,000 workers went on strike after industrialist George Pullman, owner of the Pullman Company, cut more than 2,000 jobs and slashed wages by 25 percent in an effort to maintain profits. The decrease in wages was not met with a decrease in rent for the company owned housing that workers lived in. It did not take long for the strike to spread. The workers joined the American Rail Union, headed by Eugene Debs, and by June 1894 some 125,000 workers on 29 railroads had walked off the job in solidarity. Rather than negotiate with the unions, industrialists pushed the federal government to intervene. Thousands of army troops and marshals across the country were mobilized to break the strikes and get the rail cars back online. When the dust settled 30 strikers had been killed and 57 were injured. It was during this tumultuous time that Labor Day, a holiday first proposed in 1892, became a national holiday.

In the 120 years since it became a federal holiday the original purpose of Labor Day, to honor the progress of labor and the sacrifices workers had to make to secure that progress, has been lost. The well off, the industrialists, the CEO’s and vulture capitalists have never been fond of unions, but pre-World War II unions were simply a fact of American industry and despite fierce opposition from the monied class, they thrived. In 1945, 35 percent of workers belonged to a union. Now only 11.3 percent of workers do, and most of them are in the public sector. The causes of this drastic drop in union membership are myriad: increasingly aggressive employer resistance, government policies and appointments that defanged the National Labor Relations Board and empowered corporate interests, a culture that eschews collective action. Whatever the causes, the sad reality is that in the vacuum left from labors steady retreat workers have suffered and we have forgotten that the cause of labor is hope of a better life for all workers. Instead, we fight amongst each other for the bread crumbs that the elite are willing to let slide off their ever-plentiful plates. This is their aim: divide and conquer.

For our own sake, I hope we can rediscover the importance of Labor Day. Were it not for unions, many of the things that some of us now take for granted, the abolition of child labor, 40 hour work weeks, overtime pay, worker safety protections, minimum wage and so much more, would not exist. And if our current situation, in which workers are on the losing end of the economic deal, does not show the continued importance that unions still have in our society then nothing will. For what could overcome the amount of money, power and resources at the disposal of billionaire CEO’s except the collective will of the people? In order to attain the economic justice we crave, we must reclaim the legacy of Labor Day.