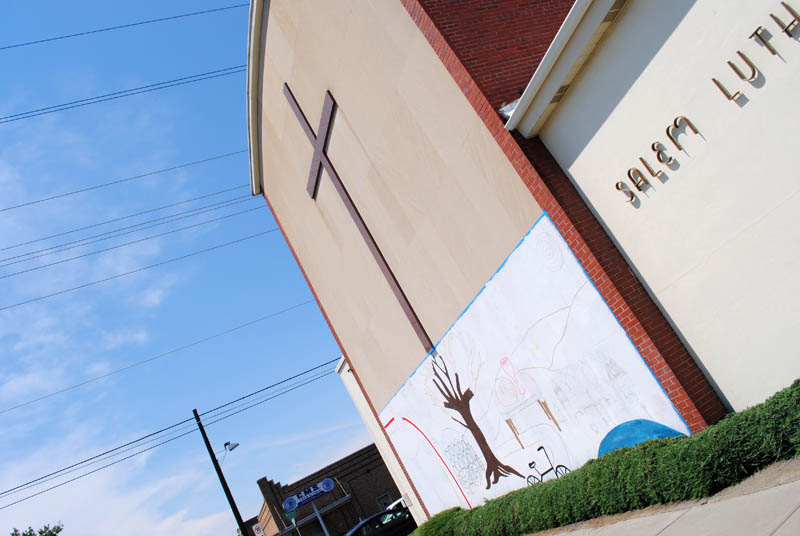 I am the pastor of a small, urban, liturgical church in the West Central neighborhood of Spokane. Life is complex and rich in this beleaguered and beloved neighborhood. There are divisions here too. Some of the dividing lines are geographic and economic. Often they are described with stereotypes: the gentrifying strip that is Kendall Yards is full of wealthy folks who wish to live unto themselves, sipping cortados in their pristine patch of lawn, while the rest of West Central will be forever riddled with meth, poverty and domestic violence, whole families falling through the gaping cracks in the sidewalk. I’m struck how often those who peek in at West Central from the outside exhibit a lack of imagination and even a refusal to see the more complicated realities.

Full disclosure: I’m an outsider too. I have served the congregation for eight years but I live across town. I try to let the neighborhood keep telling me its story. I’ve come to think the heart of ministry, the heart of pursuing relationship, begins with telling stories. Maybe it ends there, too.

Another noticeable aspect of West Central is how many churches are located here. What story are the churches telling? Salem Lutheran is situated on the visible/invisible line between the “two” neighborhoods. Every Sunday, we affirm our baptismal vocation to seek and celebrate the presence of God for the life of the world, “beginning in West Central Spokane.” To us, that means finding God on all sides of all dividing lines.

But what does that mean? How do we notice or speak about the presence of God? How do we tell God’s story in a place? What difference does it make?

I often hear of churches wanting to “come alongside what God is doing” in a given place. I talk that way sometimes myself. However, the ways we point to God’s activity can be subject to our sinful blinders of privilege and result in theologies that bless gentrification and oppression. I believe God is a God of life, renewal, and healing. And I believe we need to interrogate our narratives of redemption, the stories we tell about how God brings about the gifts of life.

In is forthcoming book, “Reconstructing The Gospel,” Jonathan Wilson-Hartgrove examines his background as a southern white evangelical. He tells the hard stories of his land. He tells of a church in Colfax, North Carolina, in which white Christians mobilized a massacre of newly freed black people on Easter Sunday. (Why does so much bloodshed between Christians occur on Easter?!?) Characterizing these freed slaves as savage and inferior, the white men of the mob spoke of “redeeming” their communities from black leadership. It’s telling they did their evil deeds by cover of night even though they thought they were serving God’s redemptive plan.

This gross twisting of theology led to the brutal deaths of many people. Bad theology has killed many, many people and brutalized the land, sea and air for generations. What worries me about Christians “moving into the neighborhood” is that we quietly perpetuate this narrative about a God who brings life and healing and, wouldn’t you know, it looks like things white people feel comfortable with.

There is a popular translation of John chapter 1 from Eugene Peterson’s “The Message.” He writes, “The word became flesh and moved into the neighborhood.” While I like that sense of God living where we live, I worry that telling the story this way inadvertently blesses white Christians moving into “impoverished” places to “bless” them. If we mean that Jesus is found amid the complex relationships in human community, I’m good. But if we’re saying Jesus moved into the neighborhood and opened a Kombucha stand, I’ve got problems.

Development that isn’t gentrification, it seems to me, is that which comes up out of the people already in a given place. It brings greater agency. What do West Central residents seek for themselves? What is the resurrection, the Easter Sunday, that they pray for?

I want the church and its storytelling to contribute to the empowerment of our most powerless neighbors. If (as?) West Central develops, I want it to be in the form of the dreams and visions of those already living here, not after the will of outsiders. I want the incarnation of Jesus in this place to mean that, while the sidewalk may not be perfectly clean, it ceases to swallow people whole.

Is there a story of redemption you need to interrogate?

Part 2 will hopefully explore places of greater conflict that I am visiting on my sabbatical and how they tell stories of redemption.

Previous Ask A Buddhist: Living a good life with mental illness
Next This year: Wishing for happiness