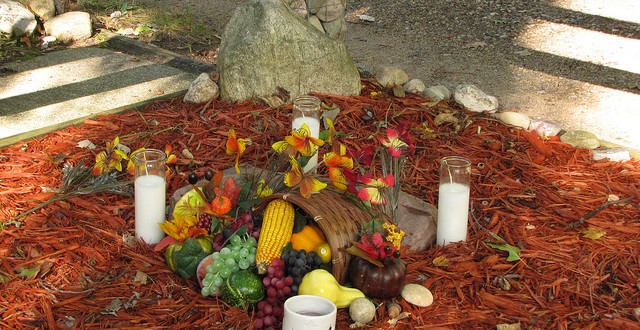 Recognizing the beauty of the the pagan Mabon celebration

I could stop there. Day and night are the same. Whoop-dee-do. But if I did, I would miss an opportunity to share some rich symbolism behind why this time of year is celebrated with focused intent.

The place to start is in nature, which is what pagans hold sacred above all else. Nature and its cycles are great revealers, teaching practitioners how to deepen their awareness and resonance with the natural world. The celebration of Mabon is intimately connected to a celebration held in the beginning of August called Lamas, which is conventionally referred to as The First Harvest. Whispered in pagan communities, however, Lamas is referred to as The Death of God.

Gasp! I know. The Death of God is such blasphemous language that it’s almost impossible to get around especially if the mind is locked into a literal or religious interpretation of God instead of an earthly metaphor and symbol.

Allow me to begin there — with metaphor and symbols in a garden in August. Here, seamless uninterrupted life-death cycles are beautifully displayed. It is easy to see plants dying a little, turning inward, refocusing energy, ‘going to seed’. The process of going to seed is, in pagan-speak, the God power dying, returning to the Goddess where it will be born again.

Lamas and Mabon invite us to return our minds to the early summer months when we watch our gardens grow and flower. Then in August, we begin to watch their demise, almost forgetting, amidst the weeding, dead-heading, and amending, that there’s a ceaseless connection of beginning and end —life and death. Many of us go into gardens, enjoying their beauty and bounty forgetting to pay attention to their lessons and spiritual analogies, let alone celebrate them.

I think the sunflower is one of the most brilliant examples of this cycle. The sunflower seed, sown naturally in autumn or by hand in spring, is the God power planted in a dark fertile Goddess earth. As the sunflower grows and towers, its consciousness knows to turn its blooming face toward the brightness of the sun, also a God power. In August, reaching its peak, the sunflower is like a flattened lemon yellow disk. Soon after, the center of the flower begins to swell, while the crown of petals begin to droop and wither. The sunflower bulges with its flowered head bowing to Goddess earth suggesting that it knows where it’s going and from where it came. Its center decorated with mini yellow crownets is utterly irresistible to honey bees and bumble bees alike. Those lovely sipping nectar straws soon cascade to the ground with the last of the petals and there revealed is the pregnant sunflower with hundreds of new God seeds tightly nestled in a miraculous pattern, full of the same life potential from which this single flower came.

Long forgotten is the original God seed that coupled with Goddess Earth to create this sunflower now dead and yet alive with new God seed ready to fall back to fertile ground. The Goddess power will incubate seeds all winter long and birth them anew come spring. The Death of God simply refers to the life power that willingly goes into death in order to be resurrected into life. This aspect of death begins at Lamas and peaks at Mabon where God and Goddess power are equal. Mabon acknowledges God-Goddess dependence and celebrates that we are making ready to leave the height of God sun and rest into lengthening Goddess night.

I celebrate Mabon by creating an altar filled with the fruits of my labor; Sunflowers are prominent but flowers of all kinds and their seeds decorate this space. There are baskets of potatoes, plums, apples, pears, pumpkins, and squash displayed. All of this to remind me of the infinite cycle of life into death into life…into death…into life…

Autumn is my favorite season and with a Mabon celebration to welcome its vibrant color, cooler nights, and abundant earth offerings, I am able to face the thought of the long winter slumber with a little more cheer.