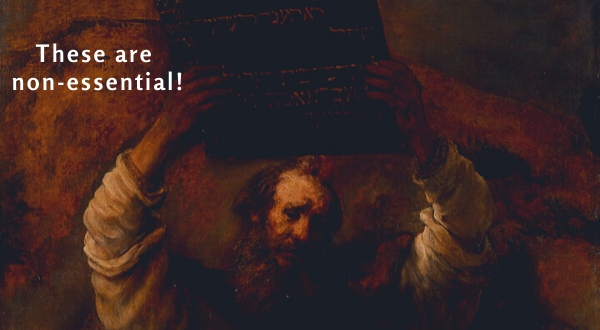 Graphic of Moses and Ten Commandment deemed on-essential by SpokaneFāVS

The following facts have been sanctioned by the authorities of the (deep) state and the powers that be:

And it’s sort of startling—isn’t it?—to see that in print, or to hear it said out loud. Maslow’s Hierarchy of Needs be damned. Be decapitated. Self-actualization has officially been lopped off the pyramid. Moreover, when Jared Diamond argues, as he does in “Guns, Germs and Steel,” that certain populations around the world have been fortunate enough to stockpile their leisure-time so as to improve the quality of life while others have had to muddle through (without the finer things), we might as well consider that theory upended like a contaminated shopping cart.

All this came home to me (and I do mean home as in my shelter-in-place) when I read Pastor Tim Remington’s comment about the face-to-face gatherings at the Altar Church in Coeur D’Alene, services that have since gone to live-streaming—Hallelujah!  “For anybody to say that the church is non-essential is a deadly statement,” Remington said. Likewise, in the state that hosted Mardi Gras festivities and has now seen a spike in Covid-19 cases, Pastor Tony Spell advises the governor of Louisiana deem churches as offering “essential services.” Others in attendance at the Life Tabernacle Church in Baton Rouge worry, “What’s gonna happen when they come for our guns?” Adding to this sanctimonious mayhem, the pastor of a Tampa Bay congregation, known as The River, has been arrested for conducting services, and after being released on bail, Rev. Rodney Howard-Browne has suffered anonymous death threats out the yin-yang. And yet, the question filtering through all these cultural kerfuffles, I suggest, is the question that should have, and could have, become obvious long before now.

Long before this Covid-19 crisis, we could have made the educated guess as to where things stood vis-a-vis the Essential and Non-Essential.  In North America, of course, Christendom and Gun-Ownership have always been notoriously blurred, overlapping and merging into each other’s categories, depending upon the end-of-times viewership of “Jack Van Impe Presents;” both have been deemed Essential to both, and each to each.  And as an illustration, all we have to do is consider Charlton Heston, playing his dual-role as Moses in “The Ten Commandments” alongside the president of the National Rifle Association. (As the former, he confronted Pharoah by throwing down a shepherd’s staff, and as the latter, he threatened anyone who might pry his arthritic knuckles from the trigger of his gun—something, something about his cold, dead hands!) The point is—given the twin-traditions of rugged individualism and pious revivalism—the sight-lines of heroic sniper’s scope have frequently appeared like the right-angular cross of the Crucified (for too many). Sociologically, one sort-of guarantees the (self-)righteousness of the other, and the vast majority have been impressed with, and seen little reason to disavow, the arrangement. Until 2020, and the arrival of this invisible enemy.

Constitutionally, to be sure, the criteria of a “well-regulated militia,” found in the Second Amendment easily trumps the First, which declares (among other freedoms)—“Congress shall make no law respecting the establishment of religion.” And so, we probably should have seen this coming.  We probably should have seen how the right to bear arms would eventually divorce itself from the mere option of exploring faith and spirituality in community with others. Just think about the history; weaponry—in all its forms— is an absolute necessity when you’ve just thrown off the bonds of a tyrannical monarch (i.e., King George). But when a religion like Christianity simply functions as the moral conscience of a budding nation, that nation may inevitably come to full economic flower and find that transcendent truth-claims are more of a luxury that we can do without. And when navigating the shoals of this emergency, one would be justified (in the eyes of some) to retain an ample stash of bullets over and above the anointing oil or the baptismal font.

You know this as surely as you know that choir members can spray their germs up to 27 feet—and hence, the public nuisance and hence, the public health hazard congregations hither and yon have become. Unlike groceries and grocery clerks, pharmacists and certain medications, treasury secretaries and their much-anticipated unemployment checks—and unlike your purchase of the Glock 47—the goods and services provided by churches, synagogues, temples and mosques are non-essential. Face it. The reality, if reality is determined by social norms and clandestine conspiracies, is that all devotees of the divine are out, off and otherwise shooed to the margins where we can do less harm.

And yet, I do wonder.  I wonder what the exhausted health care workers—the paramedics, the doctors, the nurses and the hospital cleaning staff—will think and will feel and will do after exiting this overload to the system. Will they simply work themselves into oblivion? Will they quit? Will they contract the virus because of a shortage of P.P.E., and then recover to altruistically throw themselves back into service?

Now, I don’t want to ruffle too many feathers before Easter’s low-key activities, but the possibility remains that Possibility will ultimately win out.  n other words, knowing what we know for certain in regard to what is actually taking place—and you might slap yourself with a gloved hand on your masked face if you doubt the severity of this pandemic—it is still possible to conceive of a religious, spiritual or faith adventure which willingly embraces its Non-Essential condition for the world at large. In fact, thanks to the decrees of governors like Jay Inslee and Brad Little, anyone who still enjoys a sense of smell may take heart. That person may take solace in the possibilities that come home to those who don’t want to take center-stage in the power-politics of the land. Moreover, if some curious souls still regret our inability to travel back through time, here is the chance to discover what it was like for those catacomb-worshippers, those first-century Christians who gathered in secret, and in small groups. Here is your opportunity to pray, sing and serve like them. And yes, if you act right now, if you seize this very isolated moment, it might be appropriate to ask how much your previous interest in a religious world view, or even your conversion to Christ, has merely been a matter of social convenience. In other words—was your previous spiritual practice merely a matrix of the like-minded, or a maintenance of the status quo? When interpersonal squabbles would arise in one tribal context—or if the music was not to your taste—did you move on down the road? And why? Were you more concerned with smooth-flowing aesthetics than with the essential message of love and compassion? Any personal reflection in this regard might be a life-changing—although non-essential?—use of your Saturdays and Sundays from this April onward. Blaise Pascal said as much when the bubonic plague had already been ravaging Europe for centuries. “All of humanity’s problems,” he wrote, “stem from man’s inability to sit quietly in a room alone.”

More broadly—and more specifically for the solitary Christian believer who lives and bears witness in and around Spokane—I would encourage you to lose yourself in this Non-Essentiality before it goes away again. I mean, why not choose to be marginal?

Try it for a season, for a month or two, or even a year. Being essential is overrated. (Don’t tell me it hasn’t occurred to you before.)  It goes to your head, and makes you feel as if you’re privileged before the deity of your own self-serving imagination. Other modes of imagination are now available and in plentiful supply.  In fact, there’s a mysterious passage, written (originally) to a fellowship in Philippi, and it may help all of us get through:  “Do nothing from selfish ambition or conceit, but in humility regard others as better than yourselves.  Let each of you look not to your own interests, but to the interest of others…”  The ancient hymn or poem then goes on to describe the so-called mind of Christ, “who did not regard equality with God as something to be exploited” (Philippians 2:3—6).

Sadly (or perhaps happily) as far as the functionaries of civil society are concerned—whether it is the mind of Christ or some other authentic search for meaning—it’s optional. It’s your choice—like gardening, or binge-watching Netflix, or posting pictures of your cat…or buying another gun for your collection… because you’re afraid… No one has to.  None of us absolutely has to …

Previous A Word in Favor of Solitude
Next Ask A Buddhist: Do Buddhist Monastics Beg?