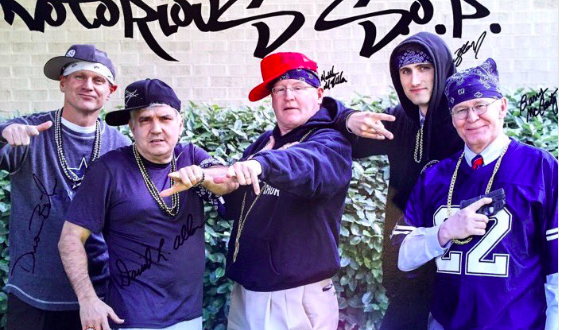 There it was.  Posted on Huffington Post for anyone and everyone in the world to see. Five seminary professors from my old alma mater photographed as black rappers in an obviously racist pose, resplendent with a gun in the hand of one. Let me repeat that. Five Southern Baptist seminary professors attempting to be clever, even including graffiti saying, “Notorious S.O.P.” (School of Preaching).  Don’t believe me?  See the above photo!

Naturally, the president of one of the largest Protestant seminary in the country was quick to apologize, calling it a moment of “bad judgement.” That is most certainly an understatement. What is distressing to me as a graduate of Southwestern Baptist Theological Seminary in Ft. Worth, Texas, is that these men bear no resemblance to the incredible women and men who taught during my tenure there. Granted, I attended the seminary before the fundamentalist took over the Southern Baptist Convention in the late 1970’s, removing any moderate staff, all women theology professors, and replacing them with like-minded ultra-conservatives.  I had imagined that things had changed since my days, but it grieves me to see this radical level of change.

Someone asked, “What were they thinking!?” The truth might be that they weren’t thinking about the consequences of what they assumed was an innocent photo designed as a gift for a departing colleague.  Perhaps even when they boldly posted the photo on social media, they might have thought it was ‘cute.’  The reality is that it isn’t cute, or appropriate, or sensitive or Christian. It is, however, indicative of the white male dominance of an entire denomination that once focused on mission and ministry.

It’s difficult to remember exactly what my seminary days were like back in those days, but I do recall several of my professors who helped to mold my own openness to the world and the humankind that inhabits it. Sitting in classes on the writings of Paul or John, sitting next to a nun in a class on missions, sharing a class with a Pentecostal youth minister who was nothing short of inspirational – these were my days. Partaking in a class on Church History in which the remarkable Corrie Ten Boom came to share her life story about surviving a concentration camp during WWII. And even spending a very long semester in a homiletics class learning how to preach a 12 minute sermon that would inspire (I still have not mastered that).

Now to see the professors from the School of Preaching mocking Blacks and believing it’s comical simply makes me shake my head in disbelief.  My dear friend, Dan Kent, who taught New Testament theology at the seminary before being pushed out, would have profound words of sadness to say if he still were alive.  Then again, he might be glad he isn’t here on earth to witness what has become of the place he gave life and passion to for such a long time.

When I left the Southern Baptist Church in 1978, I did so believing there was no place for my progressive views in that denomination that was moving so rapidly toward radical fundamentalism. From time to time, I have wondered if that was the best decision for me. But seeing what has happened to the religious institute that I loved assures me that I made the right choice.

It's not going to happen overnight, but change it will if and when it's God's will. However, leaving the church rather than sticking around to help it change helps change happen not at all.