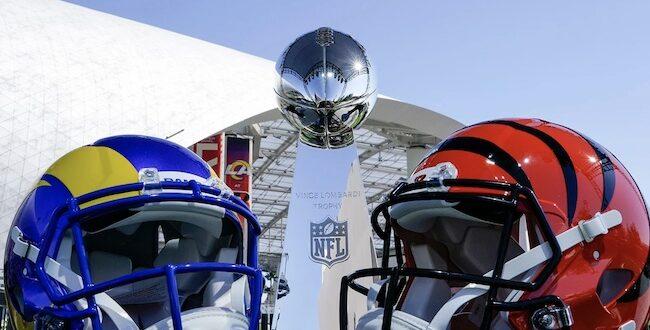 The Vince Lombardi Trophy is seen at a news conference between helmets of the Los Angeles Rams, left, and Cincinnati Bengals, Wednesday, Feb. 9, 2022, in Inglewood, California. (AP Photo/Morry Gash)

Rams or Bengals? The annual divining of the Super Bowl victor through sacred texts.

Rams or Bengals? The annual divining of the Super Bowl victor through sacred texts.

(RNS) — Every year I take a close look at sacred texts, primarily Jewish ones (I am a rabbi, after all) to divine the Super Bowl winner. My record is impeccable, but past results are no guarantee of future performance. In other words, better to take this to the pew than the bank.

So, Rams or Bengals?

This might be the first time both teams in the Super Bowl have appeared in the Bible in the same verse, a famous passage from Isaiah 11:6:

The wolf shall dwell with the lamb,

The leopard lie down with the kid;

The calf, the beast of prey, and the fatling together,

With a little boy to herd them.

Isaiah’s messianic vision of lions and lambs (rams are from the sheep family), wolves, tigers (the Hebrew word “nam’er” means both leopard and tiger) and baby goats not only covers this year’s Super Bowl teams but all the teams Rams’ quarterback Matthew Stafford has led, pro or college: the Lions, Rams and Georgia Bulldogs (a subspecies of the gray wolf, obviously). The little child who leads them could be either coach — they are both pretty young — or the second-year phenom, Bengals QB Joe Burrow. No edge for either team here.

In Isaiah’s vision, the predator and prey are meant to overcome their natural inclinations and play peacefully. That’s how he imagined an era of messianic bliss. Is Isaiah predicting the first-ever Super Bowl tie?

That’s unlikely, since the game will be played until there’s a winner (unless the Big One hits at halftime, and we don’t want to go there). But other cultures offer some corroboration.  According to Chinese astrology, the tiger and sheep have a close relationship and are potentially great partners.

Fortunately, elsewhere there are signs that point to a winner. The Chinese Year of the Tiger began just last week, which might indicate an edge for the Bengals, because it highlights their resilience. But in a South African folktale, “The Tiger, the Ram and the Jackal,” the ram’s guile allows him to prevail.

I have to say, I’m just not feeling the hate here. Maybe everyone’s just so happy to see a Super Bowl without Tom Brady that they are laying down arms. Maybe even animals are tired of seeing the G.O.A.T mess up the NFL’s cherished schemes of parity. Maybe with this pairing of teams known primarily for losing The Big Game, the messianic vision of “any given Sunday” is at hand.

There’s a surprising amount of tiger material in ancient Jewish sources, considering they rarely dwelled in proximity to large Jewish populations — until God created the Bronx Zoo. In the Talmudic tractate Avot 5:20 we read: “Judah ben Tema said: Be strong as a tiger, and swift as an eagle, and fleet as a gazelle, and brave as a lion, to do the will of your Father who is in heaven.”

There we have it again, bengals and lions (Matthew Stafford’s old team) together. It’s just very hard to pick.

But of course, rams are much more heavily featured in the sources, with their prime role in the sacrificial cult, where it typically doesn’t end well. But it is the ram who takes center stage on a major Jewish holiday. Tigers have no horn to sound on Rosh Hashanah, and I wouldn’t recommend blowing in a tiger’s ear. Only the ram was spied by Abraham “caught in a thicket” as he bound Isaac to the altar in Genesis. And it’s a special ram. Tractate Avot 5:6 says this miraculous ram, which saved Isaac’s life simply by appearing, was birthed by God during the final moments of creation.

So the Rams are special. If only we could find a link from the NFL’s Rams to Abraham’s and it would clinch the pick for L.A. Unfortunately, the Rams have no player named Abraham, though they once had a famous Isaac (Hall of Famer Isaac Bruce). But there is another link to the main character of this week’s Torah portion read in synagogues across the globe.

The Rams do have an Aaron. Do they ever! Aaron Donald is a miracle of a defensive end who also likely was created in the final moments of creation. Maybe he is that miraculous ram!

This Ram is chasing G.O.A.T. status. He already may be the greatest defensive lineman of all time. And how do I know Aaron and the miraculous ram from Genesis are connected? If you look at that passage I mentioned, aside from the ram, another object created at twilight on the sixth day was the “shamir.”

Commentators explain that the shamir was the strong stone used to cut rocks for the priest’s breastplate. Others say it was a miraculous worm. There are all sorts of legends about this shamir. But what is clear is that its initial assignment was to cut stones to be worn by … wait for it … Aaron.

And one more thing: Aaron Donald went to Pittsburgh. And the name of his college team? The Panthers. It turns out the Hebrew word “nam-er” can refer to three animals, not just two: tigers, leopards … and panthers.

So Aaron Donald, arguably the best player on the field this Sunday — and one of the best ever at his position — is a synthesis of the ram and bengal/panther and therefore the fulfillment of Isaiah’s unifying vision. He resolves unresolvable contradictions and realizes the prophet’s messianic harmonic promise.

The biblical Aaron’s most notable quality was that he was a peacemaker. Aaron, the great peacemaker, and Aaron Donald, the great warrior, resolve cosmic contradictions by leading the ram/lamb to coexist peacefully with the leopard/bengal, as Isaiah prophesied.

For a quarter perhaps. But in a reversal of nature’s assigned roles, while they may lie together, it’s the bengal, not the lamb, who won’t get much sleep.

If you add the numerals of this game, 5 and 6, together, you get 11 — as in Isaiah 11. Turns out, the vision found in those biblical verses is not about world peace at all. Isaiah was simply predicting Super Bowl LVI. And he put his shekels down on Aaron.