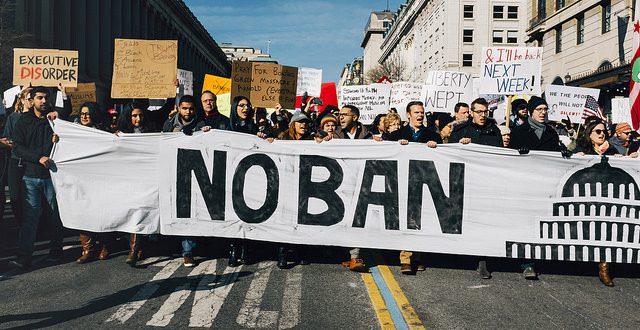 No Muslim Ban march on the Capitol in Washington D.C. February 4, 2017/Flickr photo by Masha George

Today at 5 p.m. a rally will take place in Spokane supporting immigrants and refugees.

Organized by the Peace and Justice Action League of Spokane “Rise Up for Refugees & Resist Trump’s Muslim Ban 2.0” is meant to denounce, “The Trump administration’s rewritten executive order, which turns our backs on refugees from around the world at the very time when they are most in need of safety,” according to a press release.

Trump’s revised travel ban has been blocked temporarily by two federal judges. They cited the president’s statements about Muslims during the presidential campaign as part of their rulings.

Trump, however, slammed their decision and has vowed to take the issue before the Supreme Court.

The rally will take place at the Community Building, 35 W. Main.

Similar rallies are taking place today throughout the country.