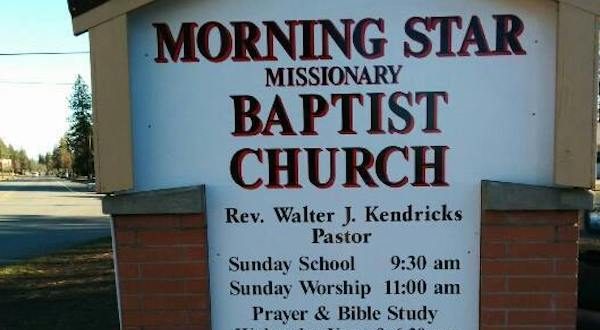 On Monday racist posters and fliers relating to a neo-nazi group were placed on the outer perimeter of Morning Star Missionary Baptist Church — a predominantly black congregation in Northwest Spokane.

Two posters found said “ITS OK TO GENOCIDE SUBHUMANS” and “TURN YOUR SADNESS INTO RAGE” with the contact information for Feuerkrieg Division (FKD) listed at the bottom of them, a neo-nazi group found 2018 in the Baltics that has encouraged violence against Jews, African Americans, LGBTQ, religious leaders and law enforcement, among others, planned by cells and individuals, rather than as a group, in order to gain power.  The Anti-Defamation League reports that this group has about 30 members.

Rev. Walter Kendricks, pastor of the Morning Star, said he first heard about the posters yesterday, when he received calls and messages informing him of the posters. He said he believes the posters were put up sometime Sunday night and Monday morning.

He added that people of good will should come together and say “Not here in Spokane” and not put up with it not just in Spokane but anywhere.

“As individuals, whenever we see hate or whenever we encounter hate we know it and stand up and say no it’s wrong,” Kendricks said.

Previous ‘Running the homeless out of the city is running Jesus out of the city’
Next Wonderfully Made Aims to Bring Dialogue, Understanding about LGBTQ Persons of Faith