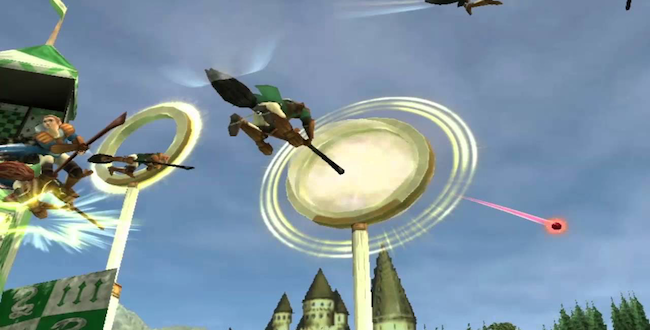 Gonzaga University offers a wide range of athletic opportunities for its student body to take part in, including football, basketball and fantasy sports like quidditch.

Quidditch is a sport made popular by the witches and wizards in J.K. Rowling’s “Harry Potter” series.

The University’s Harry Potter club coordinates quidditch matches every year and provides athletes with the proper equipment including brooms, quaffles, bludgers and of course a golden snitch.

For those who have never heard of Quidditch, imagine a game of soccer suspended in the air. Each team has seven players, three of which are called Chasers that attempt to get a ball (quaffle) in to one of three hoops. When a team scores the quaffle and avoids the goalie, or Keeper, they are awarded 10 points. Two players from each team act as Beaters who direct large aggressive rocks, or bludgers, towards the opposing team. Finally, the game ends when a team’s Seeker finds and catches the small and very fast golden snitch, awarding that team with 150 points. Additionally, the entire game is played on flying broomsticks.

“It’s a lot more embarrassing [in real life]” club secretary Emily Ellbogen said. “It’s way more embarrassing. We don’t have actual magic balls so nothing flies around. The snitch is an actual person. Bludgers are dodgeballs and we throw them at each other. The quaffle is a volleyball. And then you run around with a little broom.”

The sport has become popular on Gonzaga’s campus as well as campuses across the country such as UCLA and Ohio State University. Club President Katreina Carpenter has found that while other Harry Potter club events have a decent attendance, quidditch has become the most anticipated club event.

“Even last year [quidditch] was the one thing everyone was asking about,” Carpenter said.

Unfortunately, Gonzaga students were unable to play the game this last school year due to the theft of the equipment. However, the Harry Potter club did not let their school’s most popular fantasy sport get left behind.

“The whole last year we were trying to put on events to get people involved and try and raise money for the club,” Carpenter said.

The club was able to raise $100 to purchase equipment including 12 new broomsticks and new balls by the end of last school year.

Both Ellbogen and Carpenter have found Gonzaga students to be extremely accepting of not only quidditch, but the club as well. However, others in the Christian community have negative views of the “Harry Potter” series, believing it to promote witchcraft and sorcery.

“In high school I had a friend that had never read the books and had never seen the movies and I wasn’t allowed to talk about them around her because it was witchcraft,” Ellbogen said. “She legitimately told me that I couldn’t be her friend if I kept talking about it.”

However, the Harry Potter club has not received such backlash.

“Everyone on Gonzaga is really accepting,” Carpenter said.

The Harry Potter club will return in the fall semester with the annual sorting ceremony. Those who wish to join the club are sorted into houses based on the Hogwarts houses. They are then led on a scavenger hunt to learn what house they will join. As many as 100 students have joined the club in previous years.

Ellbogen said that the club will restart Quidditch and the Harry Potter club this coming year. Students interested in joining the club can contact any of the club officers or join the club’s Zagtivities page.

Previous Gun control is a religious issue
Next Ask An Evangelical: What do Evangelicals think of Trump?