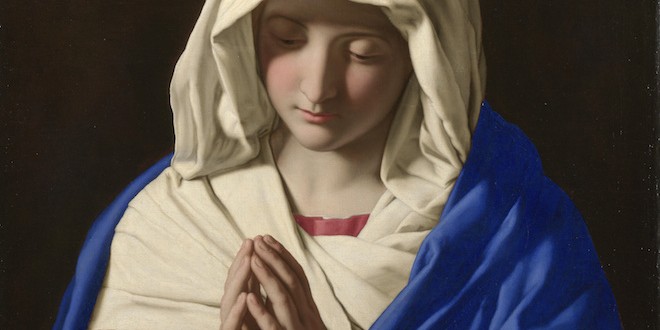 This week SpokaneFāVS posed this question to its team of writers:

Who are the most powerful women in the Bible and why do you think they are good examples for today?

We’ll post our columnists responses throughout the week, and readers, we’ll hope you’ll chime in too!

My answer is Mary, the Mother of Jesus, hands down. For starters, as my mother likes to point out, we ought to venerate and honor Mary because, “The woman who potty-trained Jesus has to be pretty great.” But in all seriousness, in the person of Mary we have, at the same time, utter humility and utter strength.
Mary was no weakling. It takes a strong person — indeed, the strongest that ever lived, in my opinion — to literally bear the Son of God, raise him, then watch him be brutally tortured and crucified. Hence Mary’s title of Theotokos, or “God-bearer,” proclaimed at the Council of Ephesus in 431. And yet, she made herself small that the world might come to know her divine son more fully.
Using the analogy of the moon to describe Mary, Archbishop Fulton Sheen said, “The moon does not take away from the brilliance of the sun. All its light is reflected from the sun. The Blessed Mother reflects her Divine Son; without him, she is nothing. With him she is the mother of men.”
Tell us in the comment section below who you think the most powerful women in the Bible are.

Previous China says Dalai Lama a ‘deceptive actor’ after brain comments
Next Most powerful woman in the Bible: The Holy Spirit