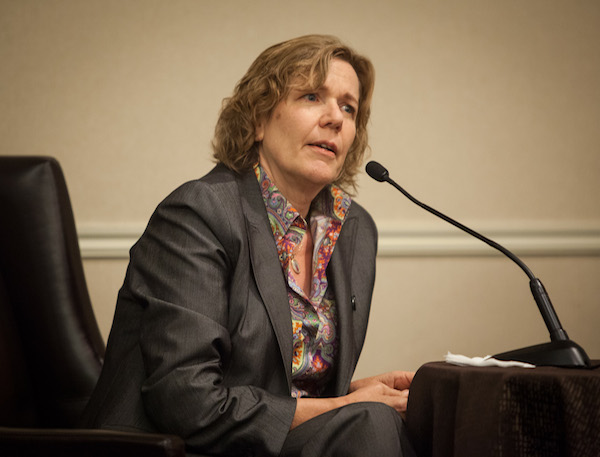 Sara Miles speaks to religion reporters at a recent conference in Austin.

Episcopal leaders from across the region gathered for the annual diocesan convention in Spokane over the weekend to discuss what it means to be a church — both inside and out of church walls.

“What we do when we come together and what we say when we worship, how is that carried forward into our lives and the way we function in the world?,” he said. “It’s about integrating what we say with what we do.”

The conversation was led by Sara Miles, founder and director of The Food Pantry, and director of ministry at St. Gregory of Nyssa Episcopal Church in San Francisco.  She is also the author of “Jesus Freak, Feeding, Healing and Raising the Dead,” “Take This Bread; A Radical Conversion” and the forthcoming “City of God” (to be released February, 2014).

Spokane Faith & Values was able to catch up with Miles during the convention.

Questions and answers have been edited for length.

FAVS: In your new book, “City of God” you write about taking Ash Wednesday out into the streets. Last year some Spokane pastors did the same thing.  Why should more clergy do it next year?

MILES: It’s not so much that we’re bringing church to the streets, people are already out in the streets having experiences of God, and our work is to be with them and be part of the conversation they’re having already. It’s a statement that we believe God is at work in the whole world.

FAVS: What’s been your personal experience taking Ash Wednesday into the streets?

MILES: It’s remarkable because I’ve had people follow me down the street saying, “Wait, wait! Can I get some of those?” What’s really striking about that is that it’s not as if Ash Wednesday is this upbeat, Santa-Clausy holiday. It’s kind of real. What I discovered is that people are desperate to hear the truth and the truth is really the blessing we have to offer. It’s not as if you cross someone’s forehead with ashes pretending to be magic, “now you’re safe.” It’s remembering you’re going to die. And they always say thank you.

FAVS: Can you talk about the Food Pantry you run and why it’s such a success.

MILES: We feed 450 people in a weekend. It’s like a free farmer’s market. We set it up right in the middle of the sanctuary, around the altar. We offer free groceries to anyone who comes. What makes it different from a lot of other food ministries is that it’s not run by church ladies for poor people. It’s run by poor people for each other.  We offer it to everyone because it’s Jesus’ table. It’s not about screening people or being a social service program. This is a thanksgiving, a Eucharist, in response to God’s gift to us, and the point isn’t just to feed people, it’s a conversion of life. Come and have the experience of working with people, giving stuff away and not judging.  And we have people of other faiths and no faiths, so it isn’t an attempt to get people to join the Episcopal Church.

FAVS: It sounds like you’re ministering to a number of people who have been hurt by the church. How can Spokane’s churches reach those people?

MILES: We have to accept that people have their own ideas about what the church is and their own ideas about who God is and it’s hard to talk people out of those. They have to have an experience that’s different. They have to have an experience, whether it’s by a neighbor, or someone they work with, or a chaplain, or at a wedding or a funeral, or meeting someone in the street giving them ashes. People’s experiences of church are real, some are wonderful and sometimes they’re awful and I don’t think you can argue people out of them or argue people into faith. I’m interested in finding ways to allow people to have and to share an experience of God instead of just talking about God.

How is your church practicing its faith outside church walls? Leave us a comment below!