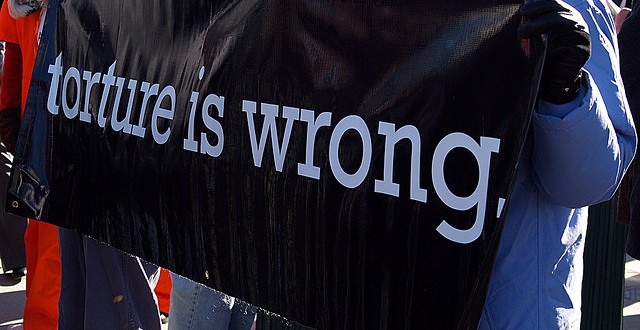 I keep a full rainbow set of sharpie markers in my desk at church. They come in handy for many purposes. One such purpose is when I’m called to go witness in the street and I need to make a bright, clear sign to express my thoughts.
On Monday, The Peace and Justice Action League of Spokane announced a protest calling for the prosecution of the two Spokane psychologists who designed and implemented the torture program of the CIA under President Bush. I had just enough time to be downtown with them before heading to Bible study. I decided to go, and I decided to make a sign.
What should go on my sign? What? I sat in thought a long while. It is Advent, and the cries of the prophets for justice to reign in the land are loud. “O that you would rend the heavens and come down.” The speech of our liturgy this season echoes that cry, “Stir up your power, Lord Christ, and come.” These spoke to me. Even the year-round call that begins worship seemed to fit the occasion, “Kyrie Eleison” (Lord, have mercy).
Yet to only reference church speech left no mention of the cause at hand: the torture of human beings, the loss of life and our loss of dignity as a nation. I thought about writing “O Come O Come Emmanuel” alongside the fairly recognizable image of a hooded victim of torture with his or her arms raised up. But, the message would need to be seen from passing cars. I also worried about children coming in and out of the mall seeing images too difficult to forget.
What can one sign accomplish?
It came down to simply voicing my own heart, my own prayers, and adding them to the public discourse. I chose to write:
We Come
We Cry
We Call
for an END to
TORTURE
That was that. A bit on the long side, but it rang true to my thoughts. It’s easy to get lost in worrying over the efficacy of any given public action. Will this change any minds? Will this lead to change on a higher level? Years ago, when the Iraq war was about to begin, I joined thousands in the streets of Chicago saying “no” to war. We held lit candles and walked and sang. A friend brought a small bottle of bubbles. I will never forget the sight of her gentle witness, blowing bubbles, contrasting with the riot gear of the Chicago police. The little shining orbs popping on their body-length shields. We were there to raise our voices in protest and lament, and to that end, we succeeded. But when I returned to my then-boyfriend’s apartment, he asked, “Did Bush see your little candle and change his mind?”
Oh, the rage I felt! Eventually, I understood that his grief over the mounting violence took the form of sarcasm and cynicism; mine took the form of naive hope. Was I engaging the same naivete around this issue of torture?
At the end of the day, I would rather be a person of hope. (I forgave my then-boyfriend and married him a few years later.) And so the little sign I create on my church office floor need not bear the whole weight of my desire to change the world. It is one small pebble. One small seed. Perhaps an unaware or undecided passer-by read it and wondered why I was “crying.” Maybe not. Maybe the message was lost under the din of sappy Christmas carols and washed out by the bright lights of the stores in Riverfront Square.
Maybe it would have been a more effective sign for all of us to get in line to see Santa and then one after another tell him we want an end to torture for Christmas. For the sake of children everywhere, that none of them would grow up and fight. That none of them would grow up and be the victims of sanctioned cruelty. That none of them would grow up and lose their humanity by torturing someone else.
This is my prayer, and even if 70 percent of the American population disagrees with me, I will pray and hope and witness for a future in which torture (and war and terror) cease to exist.

Previous Forget Santa Claus. Was there a Jesus Christ?
Next The Resurrection Series Part 12 – 1 Corinthians 15