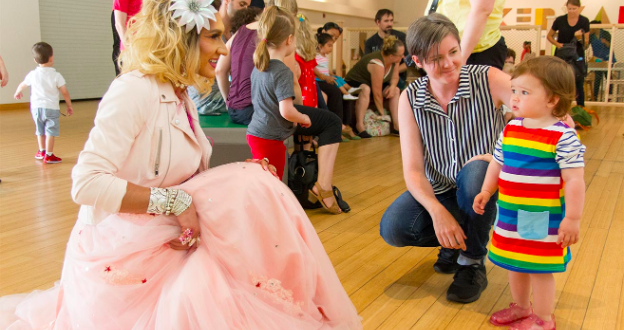 Protesting Drag Queen Story Hour: what would Jesus do

This story has been updated.

During the last week of May, Spokane Public Library announced that it would be hosting Spokane’s first ever Drag Queen Story Hour (DQSH). Almost immediately, there was a community backlash. According to KXLY, regional activist Anna Bohach was one of the people disturbed by the announcement. “Anna Bohach said she reached out to the library to express her concerns, but they responded by telling her to ignore the event,” the KXLY article states. “That was when she decided to organize…” Thursday, May 30, she created the Facebook page 500 Mom Strong with the goal of having 500 moms present the day of the DQSH to protest the event.

In her KXLY interview, Bohach says of drag, “It’s offensive. It’s no different from black face … It’s no different than exotic dancing for my toddler.” On the Facebook event, she adds: “It’s a sexist minstrel show teaching our sons that women are just sexual objects and our daughters that they must be oversexualized to be desired.”

Note, there is a community forum regarding this event slated for June 13.

From the way that she and other people attending the events have responded, it’s obvious to me that they do not understand the nature or history of drag. But, historical and cultural inaccuracies aside, to me the more alarming thing is how many of the commenters are responding from a place of fear. One commenter named Kat says she doesn’t want drag queens “polluting [our children’s] young beautiful and tender innocence.” She goes on to talk about drag queens supposedly indoctrinating children into same-sex attraction. Others also jump to conclusions about what exactly will take place at story hour, even claiming that these events are covers for sexual predators who are grooming children. A commenter named Alicia says, “Sounds like you’re into sexually exploiting children, warning pedos trolling. Nothing wrong with a ma(n) wearing a mini skirt spread full eagle in preschoolers faces!” To me that reads of paranoia, ignorance, and absolute fear of the other.

Notably, 500 Mom Strong responds to one particularly vitriolic comment thread (blame is shared on both sides): “Our humanity is a gift and it means we are to show one another respect and kindness.” Amen to that.

As a mom who has looked forward to a local Drag Queen Story Hour for literally years, I couldn’t be more excited to take my kid to this one. I am a Christian coming from an open and affirming congregation, and I see nothing wrong with affirming the humanity and divine image in all of us, regardless of what we wear, whom we love, or how we express ourselves.

But I grew up in a less accepting Christian tradition, and so I can understand the feelings of those who are organizing the protest to a limited extent. I remember a time when I was intimidated by — actually, if I’m honest, scared of — my lesbian hallmate in college, fearful that she would somehow entice me to join her in what I believed at the time to be a sinful lifestyle. I look back at my distance and fear and am sad at the loss of opportunity to build a relationship with someone, a chance to build community despite differences. Because ultimately I believe now that that was the message of Christ. That we, as God’s people, should build bridges, not walls.

And now, when I see this protest being organized by people who are so clearly afraid for their children and their community, I am saddened at the loss of opportunity to do as Christ taught us. I am saddened that the organizers are building more walls instead of bridges. And just as I wish I had befriended my dorm mate, I wish that they would see their fear and instead reach out to the organizers of DQSH to try and understand, coming from a place of compassion, not judgement. It is so easy to make decisions out of fear, but Christ calls us to put aside our fears and instead make decisions out of love and compassion. From how he treats the centurion and the woman caught in adultery to how he accepted the bleeding woman and Zacchaeus, we have example after example of how Christ put aside religious and cultural ideas of purity or unworthiness and instead reached out in compassion and love. As Jonathan Merritt wrote in Religion News, “Christ preached the Kingdom everywhere he went, but he also indiscriminately and unconditionally forged relationships with those at the margins of society, offering them a seat at the table.”

We have so much to learn from each other. And in building relationships across differences, we can get a fuller picture of the Divine. We’re taught that we all have a sliver of the Divine within us, that we were all made in the image of God. May we all be more compassionate toward those who are different from us.

I say this as much to myself as to anyone who might read this. I too need the reminder that compassion is the highest priority. When I saw some of the hateful and ignorant things people have said in the Facebook event for the 500 Mom Strong protest of DQSH, my first reaction was anger and fear. Anger at the willful ignorance and refusal to learn about the LGBTQ community directly from the people in it. Fear about what kind of a world my son is growing up in. Who knows who he will turn out to be. But, being the child of interfaith parents, he already has a couple of strikes against him from those who are prone to hating diversity. And the thought of him possibly growing up a member of the queer community with neighbors and classmates who associate all things queer with pedophilia and other forms of abuse is terrifying to me. And it is that anger and fear that would make it far too easy to rail against the protestors and call them hateful bigots, shutting down all conversation and ignoring their humanity.

But I refuse to make decisions out of fear. And so I am raising my son, with the full co-parenting support of my husband, Neal, to be an ally to all people who are made to feel less than. I have looked forward to Drag Queen Story Hour for ages now, and I have never been more certain that such events are beautiful and necessary in this world of exclusion, ignorance, and hateful zealotry. We all need to raise children who are tolerant of differences and start from a place of compassion. And the only way to do that is to build those bridges and meet your neighbor, even if you’re fearful of a man who likes to dress as a woman.

So to Anna Bohach and the other protestors: If you can’t bring yourself to put fear aside and try something new, at least let others enjoy something that you wouldn’t. You may not understand why this event is so important to so many, but you don’t have to understand. Not every event is for every person. Why try to ruin an event that means something to someone else? Is breaking the library’s code of conduct a good example for children of how to express their dissent or anger? Is potentially scaring kids who’re looking forward to a fun day at the library really the solution? Write a letter to the editor. Attend the community discussion that the library is hosting. Organize a petition or a formal letter of complaint. But please don’t show up to protest a children’s event. I have a hard time thinking Jesus would ever do that.

Liz Schindler grew up always wanting dreadlocks. Raised in a Christian household with Quaker roots, she has always been intrigued by hippies, communal living, and social change. Now, as a mother in an interfaith household, she is passionate about queer inclusion in Christian spaces, encouraging creative play in children, and hospitality. She is still devoted to activism and is currently interning for SpokaneFāVS. She lives on the line between gentrification and poverty in West Central with her husband, Neal Schindler (also a FāVS writer), son Oliver, and their two cats (who, let’s be honest, are the ones who own the house).