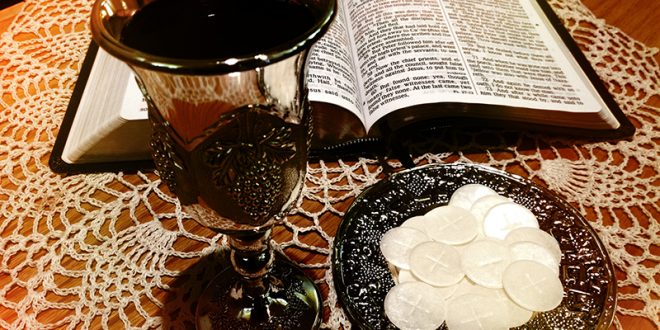 (RNS) — While the Roman Catholic world digests a Vatican letter confirming the church’s prohibition on gluten-free wafers, Protestant churches continue to place orders for a Eucharist that won’t bother the gluten-intolerant.

Gluten or no gluten — the difference is theological.

Protestant churches generally do not subscribe to the doctrine of transubstantiation, which holds that during the Communion service, the bread and wine turn into the actual body and blood of Jesus.

The Catholic Church, which affirms transubstantiation, wants to hew as closely as possible to the elements of the first-ever Communion — the bread and wine that Christians believe Jesus ate and drank during the Last Supper.

But Protestants consider Communion a symbolic act, and generally give themselves more leeway on the elements.

Wine can be grape juice. Bread does not necessarily have to be made out of wheat.

“We have more of a pastoral possibility for understanding how things might carefully and respectfully be changed to meet the pastoral needs of the congregation,” said the Rev. Susan Blain, who serves on the faith and formation staff at the United Church of Christ’s Cleveland headquarters.

“It was the Protestant churches who moved the congregations for the most part from wine to grape juice and that was because of the whole temperance movement and the concern that alcohol was dangerous to the health of a lot of people,” she said.

The Vatican letter released Saturday (July 8) reaffirmed that Communion wafers must contain at least some gluten. But the rule is not new, just a restating of an earlier teaching.

” … bread made from another substance, even if it is grain, or if it is mixed with another substance different from wheat to such an extent that it would not commonly be considered wheat bread, does not constitute valid matter for confecting the Sacrifice and the Eucharistic Sacrament,” the letter reads.

And it makes clear: “Hosts that are completely gluten-free are invalid matter for the celebration of the Eucharist.”

Low-gluten wafers, however, are deemed acceptable by the church.

Sales in gluten-free products have spiked in the past five years. Even Americans who can tolerate the protein, which is found in wheat, barley and rye, are opting for gluten-free diets — however debatable the health advantages for such consumers.

Those who suffer from celiac disease — about 1 in 100 people worldwide, according to the Celiac Disease Foundation — must stay away from gluten to avoid painful symptoms and serious health consequences.

“Surely we do not intend to exclude people with celiac disease or gluten intolerance from receiving both the bread and the cup,” reads an article on the United Methodist Church website.

“The good news is there are solutions! Good tasting gluten-free bread and wafers are available from an increasing number of vendors.”

On the website of the Lutheran Church — Missouri Synod, Lutherans are advised: “In the LCMS we have generally commended the question of gluten free wafers to the realm of individual pastoral judgment.”

But the website goes on to reference several theological opinions that speak to the acceptability of gluten-free bread, and it quotes a 1983 report on Theology and Practice of the Lord’s Supper, the Commission on Theology and Church Relations:

“Since the Scriptures are silent on the source of the bread, it may be baked from the flour of wheat, rye, barley, or other grains.”

And many Protestant churches are letting parishioners and visitors know that they should feel free to make their preference for gluten-free bread known. As one Iowa Episcopal Church advises on its website: “‘You may receive both the bread and the wine or just one of them. Gluten-free bread is also consecrated. When the priest comes to you with bread, say ‘gluten-free.’”

Previous POEM: Tasting Your Hidden Presence
Next Ask A Religious Scientist: What is meant by ‘New Thought’?