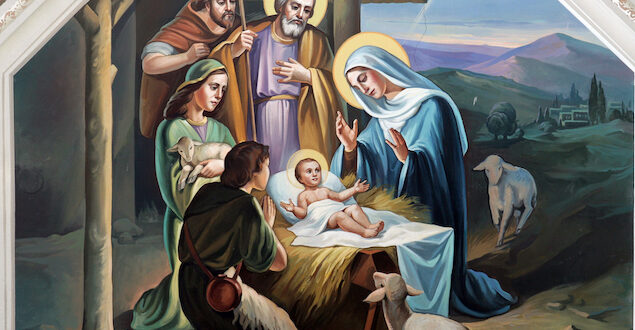 Prophetic Grace in a Manger

When I held my infant son for the first time, I felt a powerful mix of joy and panic!  Perhaps you can relate.

If so, try to imagine what Joseph and Mary felt as he laid the baby Jesus into the manger.  They both knew what angels had told them about this newborn child.  Their joy could have been overwhelmed with panic — at the very least, bewilderment.

As they wondered together about who they were parents of, did it really occur to them that this child was Emmanuel, “God with us”, God-in-the-flesh?  Did Mary remember her prayer to God in Elizabeth’s presence months before, the prayer we now call “Mary’s Magnificat”?

Read her words:  The Lord has used his powerful arm to scatter those who are proud.  He drags strong rulers from their thrones and puts humble people in places of power.  God gives the hungry good things to eat, and sends the rich away with nothing. (Luke 1:51-53, The Poverty & Justice Bible)

Her prayer challenged the established cultural order with God’s alternative view of life, as all authentic prophesy did then, and still does.  Prophecy is much less about future forecasting, and more about offering a God’s-eye view of life as it is and will be when justice and love prevail.

The birth of Jesus itself represents a decisive criticism of the dominant consciousness — of that time and our time. Mary’s prayer set the life-stage for her newborn being God becoming human so the world would know what being human was really about!

As she rejoiced in “God my savior,” she affirmed the Jewish belief that salvation was less a hope to get into heaven. Jews understood salvation as “freedom or release from current circumstances:  slavery, poverty, ill health, hunger, and thirst.

In her song, Mary is talking about salvation in the past and present, not about the far future.”  (Amy-Jill Levine, “Light of the World”)  It has a prophetic tone that tweaks current Christian belief about “salvation.”

When we celebrate Jesus’ birth only as a “Jesus sweet and mild” newborn, we unconsciously dismiss the radically prophetic message his birth and whole life embodied. Everything Jesus did challenged the religious and political status quo of his time.  And ours also!

Even his graciousness was prophetic.  His unconditional love for all people, even his “enemies,” and his compassionate actions challenged the cultural mentality of religious and economic privilege.

Outrageously, he forgave persons, he healed (especially on the Sabbath), he ate and hung out with social outcasts, he challenged the Temple practices of sacrifice that exploited the poor. All were acts of compassion and grace. But they threatened the established social/religious order of his day.  God’s prophetic grace in action.

Grace, by definition, is unearned, unmerited!  It is a free gift that God built into our DNA, just waiting for us to discover it there.  That’s our real challenge.

We cover over, even smother, that grace every time we embrace the notion that we need to earn God’s favor, or that grace is conditionally given by God according to some divine test we must pass, or God decides who gets/doesn’t get grace today.

Think about a cliché we all use:  “There but for the grace of God go I.”  I really resist that fickle God, deciding if my need is more “deserving”, or less, than yours.

That isn’t the prophetic grace lying in a manger that I visit this Christmas!

Previous Feeling stuck this Christmas? Go create.
Next 10 religious influencers who died in the decade: 2010-2019