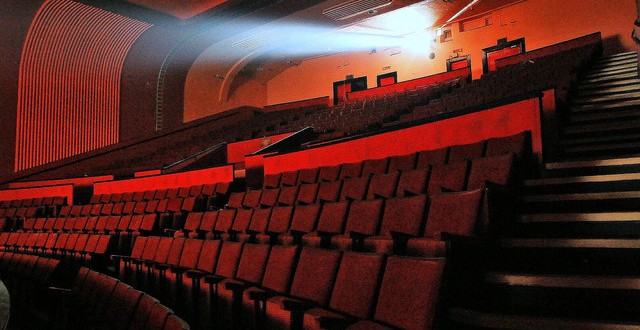 “I believe cinema is now the most powerful secular religion and people gather in cinemas to experience things collectively the way they once did in church. The cinema storytellers have become the new priests. They’re doing a lot of the work of our religious institutions, which have so concretized the metaphors in their stories, taken so much of the poetry, mystery and mysticism out of religious belief, that people look for other places to question their spirituality.”

Miller’s views are nothing new. Since its infancy cinema has been understood in religious terms. In 1921 film critic Jean Epstein described film as “profane revelation.” A few decades later Andre Bazín referred to film as a phenomenon of “salvation and grace.”

One of the most common categories that has been applied to film is that of “parable.” Unfortunately, most understandings of parables are bland and antiseptic. A common perception is that Jesus’ parables were simple, quaint stories that communicate a moral or heavenly truth. Yet the opposite is true. Jesus’ parables do not inculcate morals; they devastate them. His stories provoke rather than comfort. They disturb instead of console. Jesus’ parables shatter orthodox perceptions.

Jesus’ parable of the “Good” Samaritan is a classic example (Luke 10:25-37). In this well-known (but little understood) story, Jesus offers an ethnic and religious outsider as the hero. Samaritans were only part Jewish (think Mudbloods), and they differed religiously in significant ways from their Jewish counterparts. Samaritans only regarded the first five books of the Hebrew Bible as canonical; they had their own, altered version of this text (Samaritan Pentateuch), and, in violation of Deuteronomy, they built their own temple at Mt. Gerizim to worship God. Violence erupted between Jews and Samaritans. In 129/28 BCE, a group of Jews led by John Hyrcanus destroyed the Samaritan temple.

Jesus tells this story in the midst of a dialogue with a lawyer, and after they both agree that loving one’s neighbor is an essential requirement for eternal life (Luke 10:25-29). The Samaritan’s acts of mercy toward the beaten man on the road therefore make him eligible to receive eternal life. Even more troubling, Jesus concludes by telling the lawyer to become like the Samaritan (“Go and you do likewise!”). The ethnic and religious enemy is thus not only the story’s hero; he is the moral exemplar – the person we are to imitate. The message of this parable is not to love the Samaritan, challenging though that might be. It is to become like him.

This challenge is more evident if we consider that for Christians in America, the contemporary parallel of a Samaritan—an ethnic and religious outsider with whom we are engaged in violence—would be a member of an Islamic extremist group like al-Qaeda. And it is difficult to imagine American Christians entertaining the notion that such a person could inherit eternal life and, in any way, be a model of behavior for us.

Two other examples illustrate the subversive power of Jesus’ parables. The parable of the Sheep and the Goats (Matt 25:31-46) is explicit that the final judgment will have nothing at all to do with one’s faith, religious beliefs, religious identity, or participation in a religious community. Going to heaven or hell will rather depend entirely on whether one feeds the hungry, gives water to the thirsty, clothes the naked, visits the imprisoned, cares for the sick, and welcomes the foreigner. The parable of Lazarus and the Rich Man (Luke 16:19-31) is more disturbing: it suggests that economic status is the only criterion that matters when it comes to our eternal destiny: rich people are punished in the afterlife, and the poor are rewarded.

Jesus’ parables threaten our cherished myths. As Bernard Brandon Scott notes, the “threat of the parable is that it subverts the myths that sustain our world.” A pervasive and sacred myth in our own culture is the American Dream. James Truslow Adams coined the term “American Dream” in 1931, describing it as “that dream of a land in which life should be better and richer and fuller for everyone …” In 2013 the dean of Harvard’s Business school confirmed that at the center of this Dream was a zealous devotion to unbridled optimism and success.

In 1999, many films began to appear that functioned as parables in their subversion of the American Dream. “Fight Club,” “American Beauty,” and “About Schmidt” assault the religious bankruptcy of a sacred American myth, the American Dream. These films indict the American Dream as bankrupt in its ability to provide religious, spiritual, and existential meaning. The main character in each film is a beneficiary of much of what the Dream has to offer, but despite or because of these things, he finds himself spiritually comatose. We are indeed, these films propose, “half awake in a fake empire.” Meaning in these films is only found in rejecting central pillars of the American Dream – family, stable home, career, financial security, etc.

Incidentally, the release of these films coincided with an economic zenith in American history. From 1995-1999 the US stock market its highest five-year gain since 1970. The highest five, ten, and fifteen year annualized returns since 1970 were also realized in 1999. These films signal a correlation between economic success and profound spiritual dissatisfaction with such success.

One of the chief characteristics of the American Dream is its elevation and worship of success. At least part of the rabid support for Donald Trump’s campaign is rooted in this cultural devotion to success. In this cultural system, failure is unacceptable, and the quintessential example of failure is death. The American Dream offers no healthy or helpful mechanisms for coping with death. So we banish death.

In his groundbreaking 1973 book, “Denial of Death,” Ernest Becker argued that people were principally motivated by their terror of death. “It is the basic fear,” he maintains, “that influences all others, a fear from which no one is immune, no matter how disguised it may be.” “It is the terror that we carry around in our secret heart.”

A study one year later by Philippe Ariès corroborated Becker’s thesis, and argued for a gradual erasure of death in western civilization in the 20th century. Ariès identified the United States as the epicenter and origin of this revolution in forbidding death. The trend toward denying death began at the turn of the twentieth century and accelerated markedly between 1930-1950 when the locus of death shifted. Dying at home became too inconvenient, so instead of dying in the bosom of one’s family, one died in the hospital, sometimes alone. As the new “masters of death,” doctors presided over the absence of a ritual ceremony in hospital deaths. An acceptable death became that which did not place too grievous or onerous a burden—emotional or otherwise—on family members.

Ariès argues that practical changes in the funeral ceremony facilitated this cultural exile of death. The family reception line was removed, dark clothing was no longer mandatory attire, the coffin became the “casket,” funeral homes were privatized, and with cremation the corpse was banished. If the corpse was kept, its deathly pallor was made tolerable through embalming, a practice begun in CA in 1900 and virtually unknown in Europe. Ariès notes:

J. K. Rowling makes the critique of denying death a central thread in her “Harry Potter” series. What distinguishes the main protagonists from the antagonists are their attitudes toward death. Lilly, Harry, and Dumbledore willingly embrace death. The “death eaters” follow Voldemort (whose name means fleeing from death) whose avoidance of death entails splitting his soul into several pieces, a fitting symbol for the price one pays for denying death.

“Fight Club,” “American Beauty,” and “About Schmidt” are parables in that they propose the counterintuitive notion that facing death enhances meaningful living, and that ignoring mortality leads to spiritual death. Meaningful living, these films suggest, requires that we mourn our own deaths.

Matthew Rindge is Associate Professor of Religious Studies at Gonzaga University (Spokane, WA). The material in this article is adapted from his recently published book, Profane Parables: Film and the American Dream (Baylor University Press) http://www.amazon.com/dp/1481304291

Join SpokaneFAVS for a Coffee Talk forum on “Faith and Film” at 10 a.m., April 2 at The Community Building, 35 W. Main Ave. Rindge is a panelist.