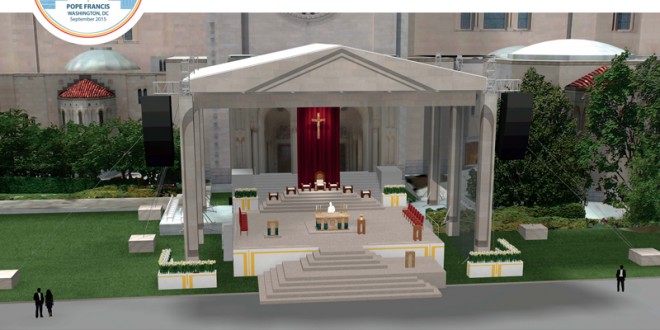 Illustration of the Basilica of the National Shrine of the Immaculate Conception. Photo courtesy of Showcall, Inc.

(RNS) Three hours after Pope Francis delivers the first-ever canonization Mass on U.S. soil on Wednesday (Sept. 23) in Washington, D.C., singers Ed Sheeran and Christina Perri will perform across town at the Verizon Center. The two events are more similar than one might assume.

“Producing an event for the pope is similar to producing a rock concert,” said Blayne Candy, co-founder of Showcall, the D.C.-based events company responsible for producing the papal Mass.

Candy and his business partner, Ajay Patil, said they were not at liberty to divulge the total production cost for the Mass. But that number must be dragging quite a few zeroes, because such an event requires personnel, high-tech equipment and security of, well, biblical proportions.

An estimated crowd of 25,000 will attend the Mass, which will take place on the east portico of the Basilica of the National Shrine of the Immaculate Conception. The event will utilize 100 microphones, 150 high-powered speakers and 1.1 miles of audio cable. Two hundred feet of metal truss will bolster 100 automated moving lights as well as 104 conventional and 18 LED light fixtures.

Assembling the stage requires a “small army” of 200 people working over a nine-day period. But the stage renderings, which were previewed at a media event outside of the Basilica on Thursday (Sept. 17), appear surprisingly modest at first glance. This was intentional, according to Showcall.

“We were of the understanding that the Holy Father is an understated character from his perspective, and we wanted the stage to reflect that,” said Patil.

Showcall wanted the stage and altar experience to be both elegant and intimate. This meant designing a stage that felt like an extension of the Basilica rather than an accessory to it. Showcall’s designers opted for only two modest screens in hopes of drawing the crowd into the physical experience. But all this was not without its challenges.

“The presence of trees throughout the crowd area made our task difficult, so we leveraged 3D-rendering programs to place ourselves in the position of any guest with a ticket to see what they can see and anticipate what they can and can’t hear,” said Candy.

In at least one way, the pope’s Mass is even more complicated than a rock concert: security. The event has been designated a National Special Security Event by the federal government, which means the Secret Service is responsible for the safety of everyone at the event, not just the pope. The manpower and tactics involved are classified and not even Showcall’s co-founders know the details of all the precautions that are being taken.

But according to Candy and Patil, who are both Roman Catholic, perhaps the most unique aspect about next week’s Mass will be the audience. The pope has attracted more than just the usual Catholic Mass attendees — non-practicing Catholics, Protestants and even non-Christians seem enraptured by him.

“This pope has enlarged the tent for Catholics,” said Candy. “So the biggest surprise at this event may be the way it will energize a diverse community.”

And reaching beyond one’s fanbase to attract such a vast array of people is something not even rock stars can claim.

Previous The “Conquest” and What We Can Do to Save the World
Next Can you help FāVS raise $1,000?