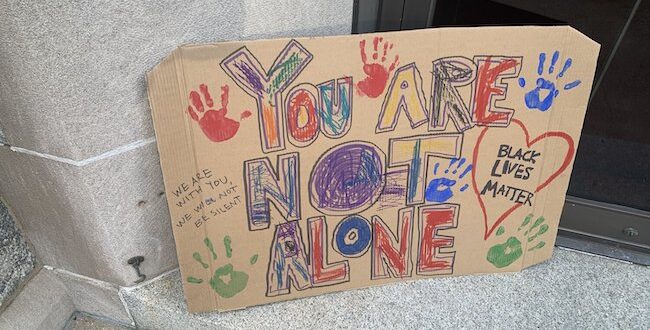 A sign made by Kyla, a member of a neighboring church to Asbury, to support the community. Photo by Hamil Harris.

In addition to Asbury, protesters destroyed Black Lives Matter signs at the Metropolitan African Methodist Episcopal Church and the Cathedral Church of the AME denomination. In videos shared on Twitter, protesters identified as Proud Boys, the far-right group, marched in the street with a Black Lives Matter banner on fire, cheering and shouting, “F*** anti-fa!” The late-night protests ended with four people stabbed and 23 arrested.

“They tore down our sign and burned it in the streets,” said Mills, pastor of the District’s Asbury United Methodist Church that was established in 1836. “We will put a bigger sign to fight for justice and create beloved community.”

Kristen Clarke, president and executive director of the Lawyers’ Committee for Civil Rights Under Law, compared the Proud Boys to the Ku Klux Klan, saying “their destruction of Black Lives Matter signs are nothing more than modern-day cross-burnings intended to intimidate and terrorize the Black community.” In a statement, she called on the U.S. Department of Justice to open a federal civil rights investigation under the Church Arson Prevention Act.

Mills reminded the community that her church is no stranger to racism.

“We are a resilient people who have trusted in God through slavery and the Underground Railroad, Jim Crow and the Civil Rights Movement, and now as we face an apparent rise in white supremacy,” she said in the statement.

Named after Methodist evangelist Bishop Francis Asbury, the church has been home to abolitionists, the Underground Railroad, freed slaves and Civil Rights activists who took part in the 1963 March on Washington. On Sunday, a steady stream of visitors came by the steps of the church with signs of support.

“It’s critical that we all be together,” said Kyla, a member of All Souls Unitarian Church in D.C. and only gave her first name. She made a sign that said, “You are not alone,” with a drawing of a heart that said “Black Lives Matter.”

The intersection of Pennsylvania Avenue and 14th Street has been a crossroads of protests against claims of election fraud, fueled by President Donald Trump since the Nov. 3 elections. On Saturday, Trump supporters cheered from Freedom Plaza when Trump flew overhead in the Marine 1 helicopter, and then verbally clashed with Black Lives Matter counter-protesters.

The Trump campaign has brought more than 50 court cases in six states, including to the Supreme Court, but after investigations, U.S. attorneys have found no evidence of widespread election fraud.

On Sunday morning, Trump tweeted “MOST CORRUPT ELECTION IN U.S. HISTORY!” The tweet with a disclaimer: “This claim about election fraud is disputed.”

Asbury is located near 16th and M streets, five blocks from the White House.

“We are a people of faith. As horrible and disturbing as this is for us now—it doesn’t compare with the challenges and fears the men and women who started Asbury, 184 years ago, faced,” Mills said. “So, we will move forward, undaunted in our assurance that Black Lives Matter and we are obligated to continue to shout that truth without ceasing.”

On Monday, the Electoral College is scheduled to officially declare Joe Biden the winner of the 2020 Presidential Election. Regardless of the reaction, Mills along with other downtown D.C. pastors and merchants hope that calm, tourists and only peaceful protests will return to the nation’s capital.

“Asbury United Methodist Church abhors violence of any kind,” Mills said in the statement. “We call upon all to join us in prayer for our community, church, and the people who are responsible for this hateful behavior. We believe this is a wakeup call for all to be more vigilant and committed to anti- racism and building a beloved community, and we invite you to join us.”

Previous Ask A Jew: Misusing Sacred Jewish Words
Next Jesus in Islam and Christmas for Muslims