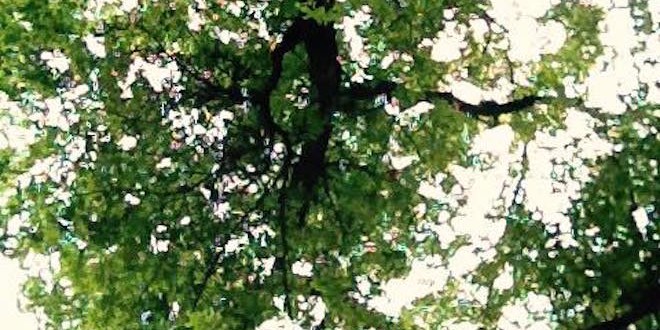 When did you last hug a tree? Groves of trees can be beneficial in many ways. We can access the divine in a different way from worship in temples or manmade structures. We can enjoy the beauty and utility of greater biodiversity. We can eliminate some of the carbon footprint created by our lives.

In the “Trees, Forests, and the Sacred” session at the 2015 Parliament of Religions, Jason Minton Brown explained how environmentalists, naturalists, and people concerned with biodiversity and deforestation are reaching out to religious groups for help in preserving sacred groves. Together they are saving and maintaining thousands of sacred trees and natural sites.

Brown, who is a Ph.D candidate at the University of British Columbia has religious roots in the LDS (Mormon) church and so is familiar with the sacredness of groves of trees. The LDS church helps maintain and preserve four sacred groves or natural areas: One grove is known as the Sacred Grove where Joseph Smith had his first revelatory experience in Palmyra, NY; Also in New York the Hill Cumorah; Joseph Smith’s birth place in Vermont and another revelation site in Pennsylvania are all maintained by the LDS church. Noting that the LDS church bought the Palmyra site in the 1920’s, Brown said, Robert Parrott, a forester and naturalist employed by the Church, is working to bring the Sacred Grove back to its natural state.

Describing some of the many many sacred groves or forests around the world, Brown explained how in Estonia, one of the places in Europe with the least organized religion, a majority of people believe trees have souls. They have 550 preserved groves and 2000 Hiis (Estonian for sacred trees).

Brown’s dissertation research is on the perceptions and management of Catholic monastic landscapes in the American West. While his religious roots are in the LDS (Mormon) Church, he has recently begun practicing Zen Buddhism and Catholicism. He is a founding member of the Salish Sea Spiritual Ecology Alliance, a civil society organization dedicated to Inter-path ecology work.

He talked about how in Thailand, where logging is destroying huge tracts of land, monks have started ordaining tree and wrapping them in robes in order to protect them. In some cases logger don’t cut the trees because they know they are sacred.

In Haiti, where deforestation is having disastrous consequences, the Mapou tree considered sacred is not being cut down. There is a similar story with a Great Oak in Northern California which is thought to be 2000 year old and the Mahabodhi tree (ficus) in Bodh Gaya, India. There are nearly 150,000 sacred tree sites or forests throughout India, which are being preserved because of naturalists and people of different faith traditions working together.

In Fish Lake not far from Salt Lake City, where the Parliament of Religions is being held there is a quaking aspen grove that is possibly the largest organism in the world. The root system covers 100 acres and could be 300,000 years old, said Brown.

Tree sites that have a cosmogonic / cosmological or mythical legendary domain are being preserved. Noting the different kinds of places that are maintained by religious organizations, Brown added, worship space or spaces with a focus of worship, dwelling place of spirits, and places that are the objects of rituals or intension. In some places specific kinds of tree are being planted so that the leaves can be brought as offerings to the deity.

Previous Quotables: At Parliament Faith Leaders combat hate speech, war, violence
Next Ask An Atheist: How can we explain fruit without a creator?