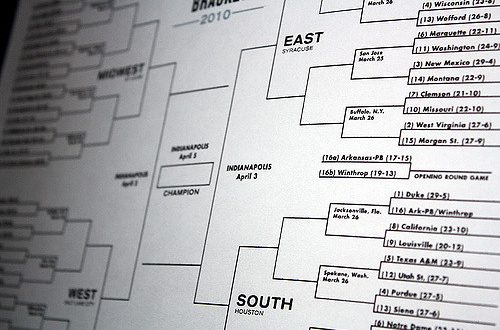 Prayer begins with this B-racket

If we can let ourselves go in prayer and speak all that is in our minds and hearts, if we can sit quietly and bear the silence, we will hear all the bits and pieces of ourselves crowding in on us, pleading for our attention. Prayer’s confession begins with this racket, for prayer is noisy with the clamor of all the parts of us demanding to be heard. The clamor is, the sound of the great river of being flowing in us…

“Harrison Bergeron” is a short story, written by Kurt Vonnegut, about the dystopian year 2081, when the advantages of one person over another are offset by the government, and when, in the name of ‘equality,’ the physically-gifted are inhibited by cumbersome weights, hung around their limbs, and the intellectually-gifted have their thought-processes interrupted by an ear-splitting, metal-on-metal noise, the result of technological implants in the brain for the specific purpose of disrupting ingenuity and insight. I mention these fictional impediments or encumbrances of an imagined future because of the contemporary concerns I hear about the seeding of the NCAA Men’s Basketball tournament.  In March, of course, it’s all about the Bracketology—which is the commercialized conceit by which over 70 million people will predict Kansas over Cincinnati, or even West Virginia over Gonzaga, and bet nearly $9.2 billion on winners and losers—and the bottom line is a lot of noise.

The Bracket is a racket, and although I myself have made my share of ‘picks,’ I wonder about the mystique of all that money, all that effort and all that energy being expended perhaps at the expense of other thoughts which we bracket aside.  Consider, for example, a competitive pitting of anxieties, one against another, vying for their place in the Sweet Sixteen.

The alleged collusion of the Trump Campaign with Russian Oligarchies is now going head-to-head (in my head) with the potential that millions of Americans will lose their affordable health care very soon.  I need more time to study the issues before I make my pick.

On the other side of the Bracket, however, I have the looming depression over the fact that a majority of electoral college voters cast a ballot for the man with the orange hair and the undulating jowls over the fact that North Korea is shedding missiles into the Sea of Japan like the prepubescent fan for Northwestern shed tears for that technical foul called on coach Chris Collins.

Mick Mulvaney is a rising star with the Office of Management and Budget (OMB), who claims that Meals of Wheels “sounds great,” but we can’t afford to fund a failing program; and he scores points with a certain segment of the population.  But this anxiety of mine is now matched with the proposed allocation of an additional $54 billion for defense—most of which would target “emergency wars.” I tell you, it’s a tough call, but I’m leaning toward an overtime angst in favor of the overfunding of the Military Industrial Complex.

In the Spokane region, there’s a pivotal match-up taking place between the suspension of a Ferris High School coach over an alleged ‘hot dog’ incident versus the cell-phone found in Holmes Elementary School playground with child-porn images among the photographs.

All in all, my fears, frustrations, worries and genuine grievances are not atypical, and I’m certain that you too can come up with your own Elite Eight, or Final Four match-ups.  But here’s what helps:  to hold in tension the multifaceted complexities of the world with the prayers that look them in the face.  “Self-discovery presupposes the discovery of one’s other (and vice versa),” writes Richard Kearney in his book, “Anatheism [Returning to God After God]”—and what seems clear to me now, in March of 2017, is that we’ve had enough of prayers with our eyes closed.

That is to say, the long-standing assumption of Christendom is that prayer happens within the private space between the individual and the Deity du jour… or that prayer happens within ceremonial halls to commemorate great moments in the institutional game of “Survivor,” that is North American religiosity today.  I aspire to counter that prayer-posturing, however, with halting words and with stuttering silences that actually compete with March Madness for our passions.

In his “Confessions,” Saint Augustine writes about his pre-Christian days as follows:

“My mind was intent upon inquiry and unquiet for argumentation… I was all hot for honors, money, marriage:  And you made mock of my hotness.  In my pursuit of  these, I suffered most bitter disappointments, but in this You were good to me since I was prevented from taking delight in anything not Yourself…”

And, you see, I’m starting to wonder if the votes we cast really matter that much compared to the degree that I’m disappointed.  My disappointments count for something more than temporary setbacks, or obstacles to be overcome by the hero of the story.  Each emotional loss, each devastating defeat and each time I don’t get my way—I’m prevented from “taking delight” in any ultimate sense.  And so…

And so, I keep desiring… and, if I’m completely honest, my desire hinges upon an encounter with another human being, any human being, who is willing to talk and to listen about the possibility of God, or about the possibility that a world without greed or avarice can exist, that a world without venomous innuendo and petty jealousy can exist; and that a world can exist on the way to that Eschatological Kingdom, that Apocalyptic Vanguard, that Age of Aquarius, that Utopian Dream.

Prayer begins with this B-racket.

Previous Our heroes help us understand ourselves
Next U.S.-Israeli teen arrested in Israel over bomb threats to Jewish centers