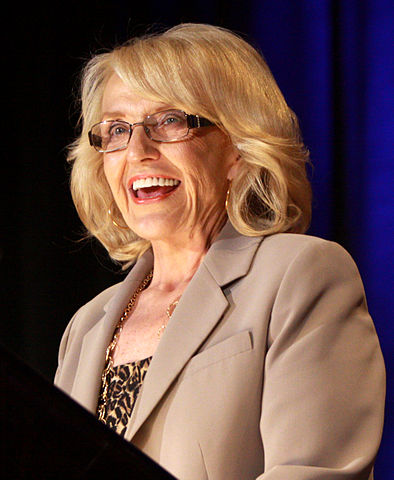 Jan Brewer speaking at an event in Phoenix, Arizona. Photo by Gage Skidmore

Practice your own religion, but don’t persecute others

It is wrong to use scripture (ANY scripture) to discriminate against others and it is wrong to declare oneself the victim when one has been caught doing such a thing. An elementary school bully is still guilty, even if they claim their victim “made them do it.” The point of religion is to bring people together. Are we furthering that goal by passing judgment over others?

It’s been almost two weeks since I sat in a church pew to listen to Pastor Roosenberg of Sealing Time Ministries speak in Spokane. Jan Shannon has pointed out in her moving reflection, Roosenberg stood in public and echoed the sentiments of Breivik—the mass-murderer who slaughtered 77 innocent people in Norway three years ago. His message: Islam is in on the rise, it threatens Christians worldwide and it will bring forth the end of days.

I recall last year when I was doing research about Roosenberg, due to virtually no information about his formal education or seminarian training being listed anywhere on the websites that promote his lectures. After being put on hold and being transferred three times on the phone, I was told by an associate of his “We don’t like to give out this information, because of the nature of his topics. People might use it against him… [People] who say he’s not politically correct.” Of course. This argument is of course not new, though it is telling that the information is not readily available for those who inquire. Perhaps we’re using the wrong phrase: is the notion of berating others in our community not politically correct, or is it not an American value?

His message—and by extension, his agreement with a known criminally-insane terrorist—is sadly not the only disappointing example of people claiming religious persecution or victimization while persecuting others. One need not look further than Arizona’s SB1062, or Anderson Cooper’s interview with one of the sponsors of the state bill to see one of two things: a modern Jim Crow law, or incredible incompetence on the part of Arizona legislature. The bill shows the thinly veiled discrimination behind those in the state, with potential unintended consequences. I wonder how many respectable companies would cancel their corporate retreats or conventions in Phoenix or Scottsdale if the bill was able to stand. As Harold Meyerson of the Washington Post pointed out, perhaps they’ll find a more receptive electorate in Uganda.

In light of Jan Brewer doing the right thing late yesterday (for economic reasons over ending discrimination)and with Roosenberg beginning his lecture series in Spokane Valley this week, I take pause to meditate on the notions of political correctness, religious objectivity and, for lack of a better phrase, common sense.

Americans all have the right to practice their own religion—and not being forced to adhere to another. Americans also believe in the free market, and the rule of law. Political correctness is not designed to destroy the American way of life. But bigotry, persecution, discrimination and the disenfranchisement of others will destroy it undoubtedly.