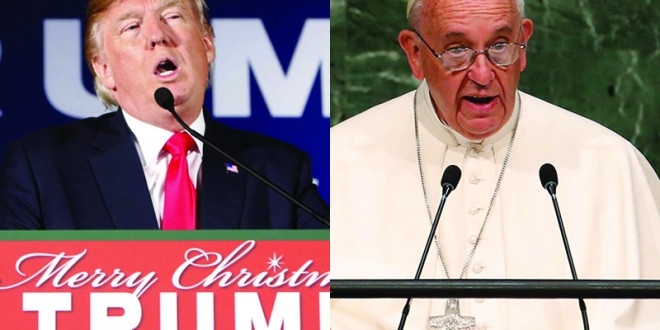 Pope versus Trump: Catholics in the US are politically homeless

Donald Trump is still leading the Republican presidential field of candidates. Observers on all sides are continually baffled and appalled by his campaign’s rhetoric. Enter Pope Francis, who made a surprise contribution by questioning Trump’s Christianity because of his proposal to build a wall on the US-Mexico border.

That Pope Francis was so forthcoming isn’t just a bold move to chastise Trump – it’s a break with the Vatican’s usual approach to electoral politics, which is typified by a reluctance (in the extreme) to get involved.

In 2003, Cardinal Ratzinger, the future Pope Benedict XVI, issued the Doctrinal Note on some questions regarding the participation of Catholics in Political Life. It argued that “the Christian faith is an integral unity, and thus it is incoherent to isolate some particular element to the detriment of the whole of Catholic doctrine”.

Ratzinger could have been thinking about the US when he wrote these words. The US’s two-party system is now even more polarised than it’s ever been, and puts devoted Catholics in a moral and political bind.

Others have written that the “Republicans are supposed to be the ‘daddy party’ (bringing home the bacon and warding off attackers) while the Democratic ‘mommy party’ cares for the poor and the sick”. But the parties’ polarisation on issues such as concern for the poor and abortion means both are on the right side of the church’s teachings – and the wrong side too.

The church’s usual way of helping voters make their minds up is Catholic Social Teaching – a way of understanding social, political and economic issues through the teaching, or Magisterium, of the church. Rooted in ancient Jewish ideas, its modern foundation has been commonly dated to 1891, when Pope Leo XIII published Rerum Novarum.

At a time when there was an ever greater gap between rich and poor, Leo expounded on the rights and duties of both workers and owners. He argued for a middle way between workers and owners: while workers should not attempt to abolish property, their rights and dignity should be respected with fair pay and conditions.

Leo set the tone for what was to follow by not favouring one side over the other, and by encouraging both to work together for the common good. This attempt at a middle way continued during the Cold War, when Catholic Social Teaching stressed the dangers of Communism (and an over powerful state) but also the moral problems of an unadulterated free market.

Catholic Social Teaching covers an array of areas that include housing, respect for the environment, abolition of the death penalty and care for immigrants. At the core of these positions, according to the church, is the need to protect the common good and respect the person made in the “image and likeness of God”.

But it doesn’t stop there. Closely associated with these ideas, which are tied to the belief in the dignity of the person in the image of God, are the impermissibility of abortion, euthanasia, and gay marriage. According to the Magisterium all of these issues have grave consequences for society and damage the dignity of the person. In his address to the US Congress in September 2015, Pope Francis duly called for compassion for immigrants and an end to both the death penalty and the arms trade, but also clearly stated the church’s opposition to gay marriage and abortion.

At the end of the Cold War in 1991, Pope John Paul II published Centesimus annus. The document, formally called an encyclical, gave a glowing assessment of the free market’s virtues, but also came with a warning:

On the level of individual nations and of international relations, the free market is the most efficient instrument for utilising resources and effectively responding to needs. But this is true only for those needs which are ‘solvent’, insofar as they are endowed with purchasing power, and for those resources which are ‘marketable’, insofar as they are capable of obtaining a satisfactory price. But there are many human needs which find no place on the market.

With the US’s presidential election and all the other down-ballot races looming, devoted Catholics all over the US face a fiendishly difficult choice.

On various core teachings, the Democratic platform broadly matches the church’s teachings – such as protection of the poor and the environment, while raising concerns about the extent of the free market. At the same time, Republican policies align with official church teaching on gay marriage and abortion. Yet, the GOP also favours tax cuts for America’s wealthiest while enthusiastically supporting the death penalty and opposing environmental regulations.

The debate has become so heated that some US bishops warned the Democrats that they were in danger of becoming “the party of death” for their support of abortion. Other bishops have echoed Pope Francis in their call for capitalism to be made more moral, though not abolished.

Catholics in the US could be described as politically homeless. Church teaching encourages them to vote, but to vote for a party that resonates with the church’s concern for the poor, welcomes immigrants, cares for the environment, protects workers’ rights and opposes the unadulterated free market – but which also stands against the death penalty and the arms trade as well as gay marriage, euthanasia and abortion.

In today’s US, no such party exists. But if the Republicans somehow end up nominating Trump, at least they’ll know the pontiff’s position is clear, on this issue at least.

Visit My Website
View All Posts
Previous Ash Wednesday a reminder of our mortality, and a prompt to be fully alive
Next Another of Justice Scalia’s Legacies