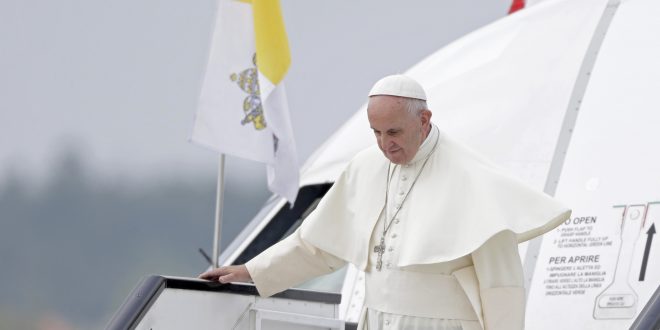 By Philip Pullella and Wiktor Szary

KRAKOW, Poland (Reuters) – Pope Francis, starting a trip to Poland overshadowed by the killing of an elderly priest in France by suspected Islamist militants, said on Wednesday this and a string of other attacks were proof the “world is at war”.

However, speaking to reporters aboard the plane taking him to Krakow for the start of an Catholic youth jamboree, he said he was not talking about a war of religion, but rather one of domination of peoples and economic interests.

After his arrival under heavy security in Krakow, the pope also took on Poland’s conservative government, implicitly criticizing its anti-immigration stance.

But his strongest words of the day came while talking to reporters about the killing of Father Jacques Hamel, who on Tuesday was forced to his knees by suspected militants who then slit his throat.

“The word that is being repeated often is insecurity, but the real word is war,” he said.

“Let’s recognize it. The world is in a state of war in bits and pieces,” he said, adding that the attacks could be seen as another world war, specifically mentioning World War One and Two.

“Now there is this one (war). It is perhaps not organic but it is organized and it is war. We should not be afraid to speak this truth. The world is at war because it has lost peace.”

About 15 minutes later, after an adviser spoke to him, Francis took the microphone again as he was leaving the journalists’ section in the plane and said he wanted “to clarify” that he was not referring to a war of religion.

Despite being rooted in Christian values, the PiS government disagrees with Francis on issues such as refugees and the environment. It opposes mandatory European Union quotas for accepting migrants.

In a speech to President Andrzej Duda and the government in Krakow’s historic Wawel Castle, he pointedly called for “a spirit of readiness to welcome those fleeing from wars and hunger, and solidarity with those deprived of their fundamental rights …”

“This means doing everything possible to alleviate the suffering while tirelessly working with wisdom and constancy for justice and peace, bearing witness in practice to human and Christian values,” he said.

Poland’s conservative leaders have harnessed a brand of patriotism infused with Catholic piety to build popularity among voters and ensure the backing of the clergy, which is influential across provincial Poland.

Francis’ five-day trip to the Krakow is taking place in the shadow of a predecessor, John Paul, who has cult-like status in Poland for his role in inspiring his native country to stand up to communist rule in the 1980s. There were more posters of John Paul in Krakow than of Francis, an Argentine.

During the trip, Francis will also visit the former Nazi death camp site at Auschwitz-Birkenau, and pray at Czestochowa, site of Poland’s holiest shrine.

View All Posts
Previous Poem: My Soul
Next How to respond to hate crimes