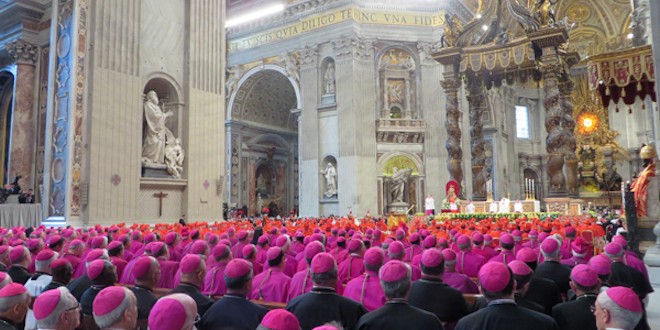 (RNS1-feb24) Hundreds of bishops and cardinals look on at St. Peter's Basilica, as Pope Francis formally appoints 19 new cardinals on Saturday (Feb. 22). For use with RNS-POPE-DISCRIMINATION, transmitted on February 24, 2014, RNS photo by David Gibson

Share this story!
[todaysdate] (RNS) Leading up to a Vatican summit on family life that Pope Francis opens on Sunday (Oct. 5), high-ranking churchmen have fiercely debated church teaching — and criticized each other — in sharp exchanges that offer a ringside seat to the kind of battles that Rome used to keep under wraps.

But amid all this verbal sparring, the opposing camps have found one point of consensus: Airing their differences is good for the Roman Catholic Church.

“Everybody is free to express his opinion. That is not a problem for me,” Cardinal Walter Kasper, a German theologian who has emerged as the point man for the reformists, said in an interview published Monday in America magazine.

A day later, Cardinal Raymond Burke, an American who heads the Vatican’s highest court and a vocal exponent of the conservative camp opposing Kasper, spoke to reporters to toss back a few barbs. But he, too, praised the frankness of the exchanges.

“For everyone to simply be silent while they see things being said that are not true, how can this be construed as being charitable or being good for the church?” Burke said in a conference call from Rome. “So I don’t see this (debate) as being a harmful thing at all.”

That’s a big change, and apparently what Francis wanted.

Since his election in March last year, the pope has repeatedly said that the church needs to be more collegial and transparent. “Fraternal and open discussion help develop theological and pastoral thinking,” Francis has said. “I’m not afraid of this. On the contrary, I seek it.”

One way to do that was an overhaul of the system of synods, the periodic summits of bishops and some priests and lay people from around the world that were originally designed in the 1960s to promote collaboration and broader discussions of pressing issues.

Yet starting in the late 1970s under Pope John Paul II and continuing with Pope Benedict XVI, the synods instead became weekslong snooze sessions where spontaneity and open discussion were discouraged. The meetings generally ended by rubber-stamping predictable conclusions that had been crafted by curial officials.

The two-week synod that Francis convenes on Sunday, on the other hand, was intentionally designed by organizers to be “more dynamic and participatory,” as they put it, and they say the pope will introduce changes on the fly if that is what’s needed to keep things moving.

Francis also made this a preliminary meeting, with another synod, featuring more bishops and other participants, to follow in 2015.

For Francis, it seems the process is almost more important than the outcome.

That became clear in February, when the pope summoned the world’s cardinals for several days of preliminary talks to get the ball rolling in what is expected to be a two-year journey of churchwide discernment.

To observers and participants of that February meeting, it was as if Francis was trying to retrain the churchmen to speak openly after so many years of looking over their shoulders in fear of Rome’s disapproval. “We’re here to learn today. It’s back to school!” Cardinal Daniel DiNardo of Houston said with a laugh at the start of one of the sessions.

At that meeting, Francis asked Kasper to deliver a lecture to frame the discussions about church teaching and the challenges of modern family life. With Francis’ support, Kasper floated ideas for allowing Catholics who have divorced and remarried without first obtaining a church annulment — a complicated and sometimes expensive venture — to receive Communion.

While the synod will discuss a range of issues, the question of Communion for the remarried has become a focus of the debate. It’s a widespread pastoral problem that alienates otherwise faithful Catholics, and something that many say could change without altering the church’s doctrine on marriage.

Kasper’s ideas went viral and prompted sharp rejoinders and also extensive, thoughtful rebuttals by ranking prelates in the Roman Curia and elsewhere. It’s the kind of buzz that most Vatican meetings never attract.

“I see so much good coming out of this that I suspect, as a fellow Jesuit, that maybe the Holy Father shrewdly tried to stir up a hornet’s nest in order to get some attention,” said the Rev. Joseph Fessio, editor of Ignatius Press, which has published several books responding to Kasper.

Fessio and Burke noted that throughout the history of the church, apostles and bishops and theologians have often clashed, publicly and sometimes fiercely, to reach a conclusion.

Early on, Paul and James clashed over whether Gentile converts had to follow Jewish law. Centuries later, delegates at the Council of Nicea battled over the nature of Jesus as God and man. More recently, the Second Vatican Council of the 1960s featured open arguments, many of which are still going on.

The danger of high expectations

There are, however, real dangers to all the hype and cardinal clashing, as entertaining as it can be for church geeks.

Both sides worry, for example, that the discussions are raising expectations among the faithful that some change in doctrine is inevitable. If the reforms don’t materialize, or don’t go as far as many want, they worry that the faithful will become disillusioned with the church.

Another fear is that by laying down such clear red lines against any changes, conservatives have painted themselves into a rhetorical corner if the synod eventually decides to adopt some reforms.

Starting on Sunday, the world will start to get a sense of how the process may play out as the antagonists will finally gather in the same room.

“The discussions won’t be easy, that’s for sure,” Burke said in what may be one of the few understatements of the entire debate.

Then again, it’s unlikely the bishops would resort to beard-pulling, as happened in an intense debate over the doctrine of justification at the Council of Trent in the 16th century — though that may be thanks to the fact that Burke and Kasper and most of the others are clean-shaven.

Previous Join the Conversation on SpokaneFAVS!
Next Regina Malveaux, executive director of YWCA, to be Coffee Talk panelist