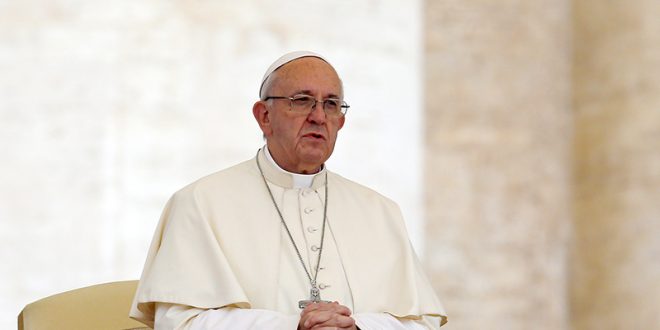 Pope Francis leads the weekly audience at the Vatican on August 31, 2016. Photo courtesty of REUTERS/Stefano Rellandini

VATICAN CITY (RNS) Pope Francis has called for urgent action to stop climate change, saying care of the environment should be added to the traditional works of mercy such as feeding the hungry and sheltering the homeless.

In a message released Thursday (Sept. 1) to mark the Catholic Church’s World Day of Prayer for the Care of Creation, which Francis instituted last September, the pontiff noted that the worst impact of global warming was being felt by those least responsible for it — refugees and the poor.

The latest message renews the powerful themes Francis launched in his encyclical on the environment, “Laudato Si’.” The pope referred several times to humanity’s destruction of the environment as a “sin” and he stressed the need for “mercy towards our common home.”

In an innovation that surprised many church-watchers and upset some traditionalists, Francis said that prayer and action to protect the environment should be added to the venerable seven corporal works of mercy and the seven spiritual works of mercy drawn from the Gospels and Christian tradition.

“We usually think of the works of mercy individually and in relation to a specific initiative: hospitals for the sick, soup kitchens for the hungry, shelters for the homeless, schools for those to be educated, the confessional and spiritual direction for those needing counsel and forgiveness,” Francis wrote.

“But if we look at the works of mercy as a whole, we see that the object of mercy is human life itself and everything it embraces.”

The pope also cited the latest research to bolster his religious exhortation, noting that global warming has continued. He wrote that “2015 was the warmest year on record, and 2016 will likely be warmer still. This is leading to ever more severe droughts, floods, fires and extreme weather events.

“Climate change is also contributing to the heart-rending refugee crisis. The world’s poor, though least responsible for climate change, are most vulnerable and already suffering its impact.”

The pope said “we have sinned” and, referring to his encyclical from last year, he said mankind has turned God’s creation into a “polluted wasteland” full of “debris, desolation and filth.”

“We must not be indifferent or resigned to the loss of biodiversity and the destruction of ecosystems, often caused by our irresponsible and selfish behavior,” he said. “Because of us, thousands of species will no longer give glory to God by their very existence. … We have no such right.”Francis stressed that human beings were “deeply connected” to all elements of creation and needed to examine their conscience and repent.

“When we mistreat nature, we also mistreat human beings. At the same time, each creature has its own intrinsic value that must be respected.”

Returning to themes he mentioned in “Laudato Si’,” the pope asked people to reflect and act on our system of “profit at any price,” which had “no concern for social exclusion or the destruction of nature.”

He called for consumers to modify their modern lifestyle in a practical way – and consume less, plant trees, separate garbage and increase car pooling.

“The resolve to live differently should affect our various contributions to shaping the culture and society in which we live,” he said.

The pope also pressed for a social and political breakthrough and urged political and business leaders to think beyond self-interest.

“Economics and politics, society and culture cannot be dominated by thinking only of the short-term and immediate financial or electoral gains,” he said.

“The protection of our common home requires a growing global political consensus.”

Cardinal Peter Turkson, president of the Vatican’s Council for Peace and Justice, said the pope was asking people to “acknowledge the harm we are doing to the Earth through pollution, the scandalous destruction of ecosystems and loss of biodiversity, and the specter of climate change.”

But Turkson, who is set to head a new Vatican department on human development, told a news conference it was possible to create change and arrest environmental destruction.

“We should not think that our efforts – even our small gestures – don’t matter,” he said. “Virtue, including ecological virtue, can be infectious.”

Previous The Challenges Of Writing A Sermon — And Tips For Sermon Preparation
Next Ask An Eastern Orthodox Christian: Praying to Saints