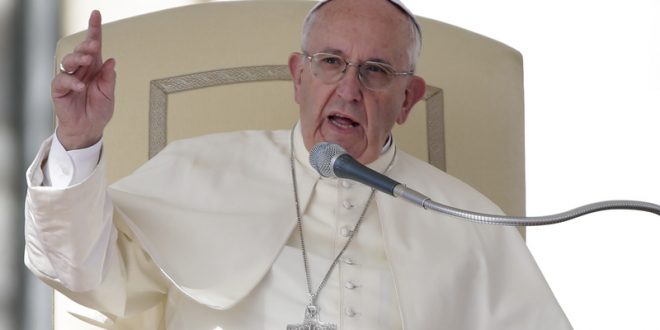 Pope Francis gestures as he speaks during his weekly general audience in Saint Peter's Square at the Vatican, on February 24, 2016. Photo courtesy of REUTERS/Max Rossi *Editors: This photo may only be republished with RNS-POPE-ISAIAH, originally transmitted on Feb. 24, 2016.

VATICAN CITY (RNS) Pope Francis has blasted employers who do not provide health care as bloodsucking leeches and he also took aim at the popular “theology of prosperity” in a pointed sermon on the dangers of wealth.

Referring to businesses that hire employees on part-time contracts so they don’t have to provide health and pension benefits, Francis said Thursday (May 19) that was akin to sucking the blood from their workers’ veins, leaving them “to eat air.”

“Those who do that are true leeches, and they live by spilling the blood of the people who they make slaves of labor,” the pontiff said at morning Mass in the chapel of the Vatican guesthouse where he lives.

Cutting staff during the summer months to avoid providing benefits is a phenomenon in Italy, but the pope said this type of mistreatment and enslavement of workers is happening all over the world.

“We thought that slaves don’t exist anymore — they exist,” the pope said. “True, people don’t go and get them from Africa to sell them in America anymore, no. But they exist in our cities. And there are traffickers, those who use people through work without justice.”

From trafficking sex workers to failing to grant vacation to employees, Francis criticized those who seek profit at any price.

Francis also focused attention on the “theology of prosperity,” which, as the pope explained, says “God shows that you are good by giving you great wealth.”

The so-called prosperity gospel is popular in the U.S., where its preachers are often on cable television, and it is a common phenomenon in Latin America, where the Argentine pope is from, and in Africa and Asia.

The problem, Francis said in his homily on Thursday, is that “you cannot serve both God and riches” because the love of money becomes “a chain” that makes it impossible to follow Jesus.

Francis took his cue from one of the day’s readings for Mass, a fiery passage from the Letter of James about the punishments the rich will suffer for having exploited the poor.

The broad meaning of the pontiff’s homily was summarized with a simple image: “A glass of water in the name of Christ is more important than all the riches accumulated through the exploitation of the people.”

The Argentine pope’s comments continue a theme of his papacy, during which he has tried to create a “poor church” that rejects the idolatry of money.

Francis has not only criticized the global financial system in the past, but spoken out about greed and the accumulation of power by Catholic leaders themselves.

Previous Upcoming retreat in Spokane to focus on the 12-Step Program
Next Ask An Atheist: Do you celebrate religious holidays?