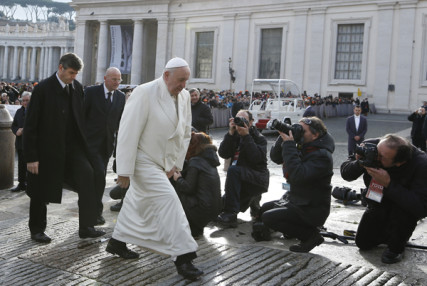 Pope Francis passes news photographers as he arrives to lead his general audience in St. Peter’s Square at the Vatican on Jan. 15. Photo by Paul Haring, courtesy of Catholic News Service

Did Pope Francis really say that? Probably not

ROME (RNS) Did you hear that Pope Francis plans to call a Third Vatican Council? Or that he uncovered previously unknown Bible verses? Or that he sees the story of Adam and Eve as just a fable?

Here’s the problem: None of it is true.

Pope Francis passes news photographers as he arrives to lead his general audience in St. Peter’s Square at the Vatican on Jan. 15. Photo by Paul Haring, courtesy of Catholic News Service

Still, that didn’t stop these and other stories from ricocheting around the Internet and, in some cases, even in traditional news sources. Among the dozens of other fake pope stories are claims that he called hell a literary device and that he believes all religions are equally true.

“The church no longer believes in a literal hell where people suffer,” Francis supposedly said, in an article appearing on the Diversity Chronicle website, whose creator, Erik Thorson, says he created the blog “for my own personal amusement.” “This doctrine is incompatible with the infinite love of God. God is not a judge but a friend and a lover of humanity. God seeks not to condemn but only to embrace.”

The tide of fake pope stories has risen so fast in recent months that the Pontifical Council for Culture issued a stern warning on its Facebook page, stating that scores of unknown sources on social media “try to put false information in circulation, taking advantage of the fact that it is so easy to ‘throw the stone and hide the hand.’”

The council’s advice? “Check the official Vatican media sources for confirmation of Pope Francis’ statements.” Remarks should be considered untrue if they do not appear on the pope’s Twitter feed, the Vatican Information Service, the Holy See press office, the Vatican website, Vatican radio, the L’Osservatore Romano newspaper or another official information source, the council said.

“If the statements attributed to the pope by any media agency do not appear in the official media sources of the Vatican, it means that the information they report is not true,” said the statement, which was written in all caps as if to underscore the point.

The Rev. Thomas Reese, a senior analyst with National Catholic Reporter, said only some fake comments are worth worrying about.

“There are basically three kinds of inaccurate comments,” Reese said. “There are the pranksters, and there are people who simply make mistakes because they don’t understand the issues being discussed. It’s hard to get worked up over those things.

“But then there are people who want to spin the pope’s point of view to further a particular agenda, and that’s very problematic and reprehensible.”

Bogus papal statements date back to the earliest days of the church. But with the explosion of social media and self-published blogs, they have become far more frequent in recent years — and especially in recent months. And the church can no longer avoid the stories or ignore them in hopes they will fade away.

“What we are seeing is a cross between the growing prevalence and influence of social media, and the popularity of Pope Francis,” said Michele M. Ippolito, a Vatican expert who runs the PapalePapale Vatican news site.

“It also must be tempting for posters to put up these comments because they like the pope’s image but are less enamored with some of what he says,” Ippolito said. “It’s like they like the singer, but not the song. And this is a way to appear to change the song.”

There’s little that can be done to confront the problem. Ippolito said the Vatican could take steps to make it easier and faster for people to fact-check papal statements. But even if they did, he said, it would be impossible to keep up with the speed of social media.

“By the time you can notice a false statement, it may have already taken on a life of its own,” he said.

The post Did Pope Francis really say that? Probably not appeared first on Religion News Service.