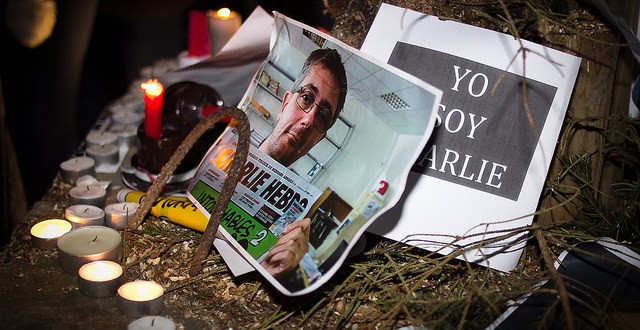 A memorial for the victims of the Charlie Hebdo attack. Photo courtesy of Valentina Calà via Flickr

Pope Francis on free speech: ‘You cannot insult the faith of others’

Speaking to journalists as he flew from Sri Lanka to the Philippines on a weeklong visit to Asia, the pope said freedom of expression was a “fundamental human right” and stressed that killing in the name of God was an unacceptable “aberration.”

However the pope, who has made a point of reaching out to Muslims, Jews and other faiths, said there were limits to self-expression when it involved insulting or ridiculing people’s faith.

By way of example, the pope referred to Alberto Gasparri, who organizes the papal trips and was beside him on the plane.

Freedom of expression has remained a hotly contested issue since Islamist terrorists stormed the office of the weekly known for mocking Islam, Judaism and Christianity.

Several cartoonists were killed in the first of three days of terror attacks that rocked France and claimed the lives of 17 victims and three terrorists.

On Jan. 8, four French imams on a visit to the Vatican issued a statement denouncing the violence and appealing to people whatever their faith to do more to promote a “culture of peace and hope.”

Previous Ask an Atheist: Which author has most influenced your views on atheism?
Next Lecrae puts the hook in the mouth with “Welcome To America”

Well, I learned in counseling that whether or not your comment is offensive depends on your intent AND the receiver’s state of mind. For instance, (and I’ll prob explain this poorly) if someone was to say to me that i am fat, I would be offended because I think I am overweight and it bugs me, so that is why that comment would offend me, because I think that it is true and is something I do not like about myself. On the other hand, if you tell me that I am tall, I would not be offended because though I am a little taller than the average American woman (at 5’8″) I like being my height so I would not mind if you mentioned it. However, if you began to really tease me, especially in a negative fashion, perhaps using name calling such as “Stretch” or something along those lines, and your intent was to make fun of me or ridicule me, then in that case I might be offended. I hope I’m making sense…

So, if I were to be speaking to my Muslim friend and say something off hand about Islam, meaning no harm and just perhaps in ignorance, then if my friend, (not total stranger) were to be offended, I would think they were too sensitive and/or looking for a fight. On the other hand, if I actually have disdain for another faith and make a similarly off hand remark, then I think it might be termed “offensive” because that’s actually how I meant it to sound. (not that I would ever do this…I wouldn’t!)

Saying that words can provoke the kind of violence that happened in Paris is ridiculous, on the same lines that saying the way a woman dresses can incite rape. No. The one does not provoke the other.

I would like to say that our vocabulary in America needs some work. We have dumbed down our language into good/bad words and lost the nuance that a larger vocabulary affords. Was is really “offensive” or merely annoying? Offensive or thoughtless? Offense or ignorance? Too often we land on offense when that is not actually what we are feeling.

I’m getting a hit of moral outrage from this article.

The game that most religions play is “our beliefs are special – you are not allowed to criticize them” This is how religious people try to claim special privilege in society as well.

What Francis is doing here is basically saying “be nice and treat religious beliefs as special” This is on the same moral footing that Islam asserts when it says that it’s OK to behead people who insult Islam – granted, Francis is much nicer than a fanatical Muslim Jihadist with a sword, but the intention is the same:

“It’s not ok to criticize my ideas”

I want to advocate for the opposite. I think that NO religious beliefs should be treated as special. I think that we need to put an end to the idea that some ideas are above reproach.