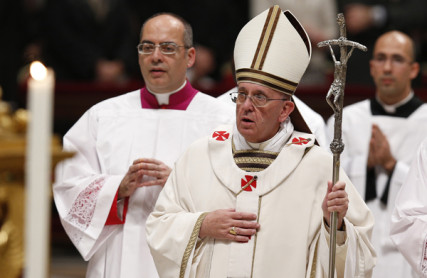 (RNS) When Pope Francis left his script Christmas morning to ad-lib an invitation to atheists to join the prayerful in “desiring peace,”  it may have been the first time an “Urbi et Orbi” Christmas address — an annual message “to the city and the world” — mentioned unbelievers.

The improvised remark was a surprise to many in the media, but not to veteran pope watchers who have heard Francis reach out to atheists before. Historian and “Catholic Almanac” editor Matthew Bunson noted several examples:

“The only thing that would surprise us about Pope Francis is if he didn’t surprise us,” the Rev. James Martin, culture editor of “America Magazine,” said Thursday (Dec. 26).

“He realizes that atheists and agnostics are people of good intentions and good morals with whom we want to work closely,” said Martin. “Jesus came into a world filled with believers and unbelievers and the pope lives in that same world.”

The post Pope Francis’ off-script Christmas nod to atheists is part of a pattern appeared first on Religion News Service.

Previous POLL: Are you going to make a New Year’s resolution?
Next Ask A Mormon: Are there positive, realistic portrayals of Mormons in pop culture?