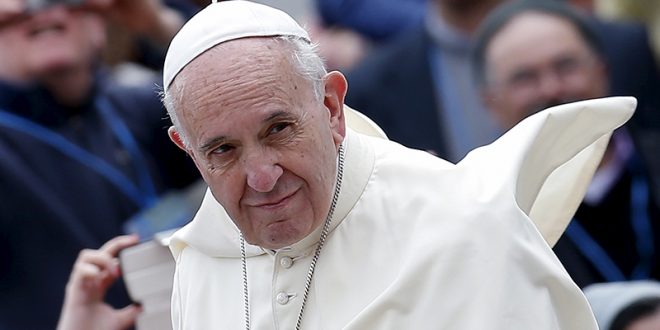 Pope Francis arrives at the weekly audience in Saint Peter's Square at the Vatican, on April 27, 2016. Photo courtesy of REUTERS/Alessandro Bianchi *Editors: This photo may only be republished with RNS-SKULLCAP-AUCTION, originally transmitted on April 27, 2016.

By Rosie Scammell and David Gibson/RNS

VATICAN CITY (RNS) In an opening with historic import, Pope Francis has said he wants to study the possibility of ordaining women as deacons, a step that could for the first time open the ranks of the Catholic Church’s all-male clergy to women.

The order of deacons was reinstituted in the Catholic Church after the reforms of the 1960s, and while deacons cannot celebrate the Eucharist like a priest, a deacon can preach at Mass, preside at weddings and funerals, and perform baptisms.

But in restoring the diaconate, the church also restricted ordination as a deacon to “mature married men” over 35.

Many protested that limitation, saying the earliest Christian texts also speak of “deaconesses” and arguing that the modern church should also allow women deacons.

St. John Paul II and Pope Emeritus Benedict XVI were both theologically conservative pontiffs who said that such a move was unjustified and could undermine the concept of the all-male priesthood.

But Francis said Thursday (May 12) he agreed the matter should be given more careful consideration, telling hundreds of nuns from around the world that he himself always wondered about the role of deaconesses in the early church.

“Constituting an official commission that might study the question?” the pontiff asked aloud in response to questions from some of the sisters.

“I believe yes. It would do good for the church to clarify this point. I am in agreement,” he said, according to various reports of the off-the-cuff exchange.

“I accept,” the pope said later. “It seems useful to me to have a commission that would clarify this well.”

The devil will be in the details, of course.

As Francis’ own questions indicated, there are thorny and long-standing debates about who the deaconesses were and what they did.

Francis noted, as many argue, that deaconesses played a different role in the early church from that of deacons, an office established by the Apostles to focus on caring for widows and the poor so the Apostles could focus on preaching.

That could mean that the papal commission could re-establish an order of female deacons that falls short of actual ordination.

Or the commission could say there is no justification for establishing the office of deaconess.

Francis has also repeatedly said — as he reiterated on Thursday — that he wants to see women assume greater and more authoritative roles in the Catholic Church, but he does not want to “clericalize” them by reducing such growth to mimicking jobs done by men.

Much may depend on who is appointed to the commission. Francis said he would ask the Vatican’s guardian of orthodoxy, the Congregation for the Doctrine of the Faith, for further information about the issue.

But the current head of that office, German Cardinal Gerhard Mueller, has long expressed the view that ordaining women as deacons is impossible. So if Mueller is calling the shots on the commission, it could be a moot discussion.

Then again, Francis has not always seen eye-to-eye with his own doctrinal chief.

Also, a commission could be a way of either stalling on the issue, or it could be a way for Francis to allow new debate on a topic that seemed to be closed after a Vatican commission in 2002 ruled that “deaconesses mentioned in the tradition of the ancient Church … were not purely and simply equivalent to the deacons.”

Whatever happens, the fact that Francis has opened the door to the debate and the possibility of ordaining women makes it a landmark moment.

“This is not only an idea whose time has come, but a reality recovered from history,” the Rev. James Martin, a Jesuit priest and author at America magazine, wrote on Facebook.

“Their preaching at Mass would mean that the church would finally be able to hear, from the pulpit, the experience of over half its members,” Martin wrote. “Taken together, all this would be an immense gift to the church. This news fills me with immense joy.”

The pope’s announcement was also welcomed by Kate McElwee, co-executive director of the Women’s Ordination Conference, who described the move as a “huge step.”

McElwee told RNS she hoped the papal body would include both women and men and make use of the research that has already been done on the topic: “I think it’ll be interesting to see who is included in the discussions. There are a lot of scholars outside of the Vatican who would be incredible resources.”

“I can’t underscore enough how groundbreaking this is for the church,” said the Rev. James Bretzke, a Jesuit theologian and papal scholar at Boston College.

“Potentially down the road, there could be female priests,” Bretzke said. “Closer down the road is the possibility of women deacons, and minimally, there is the probability of some sort of ministry created for women in the church; whether it involves sacramental ordination remains to be seen. But it’s clear that Pope Francis, I believe, is trying to move towards institutionalizing a greater leadership and service role for women in the church.”

Not everyone is likely to be as pleased.

During a global meeting of bishops at the Vatican last October, a Canadian archbishop asked that the church set up a process for ordaining women deacons, a proposal that seemed to go nowhere and was quickly opposed by conservative commentators.

“If you’ve opened the diaconate to women, you are opening up the door to female priests,” Chad Pecknold, a theologian at Catholic University of America, told The Washington Post at the time.

Quebec Archbishop Paul-Andre Durocher anticipated that criticism, telling Catholic News Service that “the diaconate in the church’s tradition has been defined as not being ordered toward priesthood but toward ministry.”

A number of other scholars and theologians and even a few bishops and cardinals have agreed, and over the years have kept the debate over deaconesses alive.

Now their arguments will get an official hearing.

Previous Poem: Faith In or Faith out?
Next Ask an Atheist: How is There Anything at All?