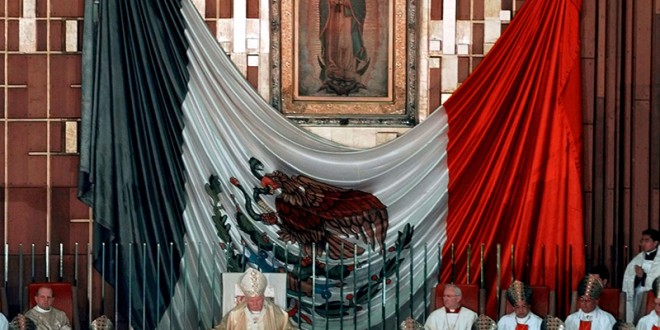 Pope John Paul II sits under the Lady of Guadalupe and the Mexican national flag during a mass at the Basilica of Our Lady of Guadalupe in Mexico City, on January 23, 1999. Photo courtesy of REUTERS *Editors: This photo may only be republished with RNS-POPE-BORDER, originally transmitted on Nov. 4, 2015.

NEW YORK (RNS) A Honduran cardinal who is a top adviser to Pope Francis said he expects the pontiff to travel to Mexico’s border with the U.S. when he visits that country in February.

“I think it’s almost sure he will go to the border. I don’t know which cities,” said Cardinal Oscar Rodriguez Maradiaga, who heads a special council of nine cardinals that Francis set up in 2013 to advise him on reforming the Vatican.

“Knowing him, he will go … I don’t know yet where,” Rodriguez said in an interview on Tuesday (Nov. 3) before taking part in a Fordham University panel on “Laudato Si’,” the pope’s groundbreaking encyclical on the moral duty to protect the environment.

Francis has made a concern for migrants and refugees a focus of his pontificate and said that he had initially wanted to arrive in the U.S. on his first visit here in September by crossing the border from Mexico as a sign of solidarity with immigrants.

He mentioned Ciudad Juarez, across from El Paso, Texas, as a possible destination.

But Francis said he realized he would have to spend at least a week beforehand in Mexico and he did not have enough time. So instead he visited Cuba for three days before arriving in the U.S. on Sept. 22 for a six-day visit.

“Going through Mexico without going to Our Lady of Guadalupe (the popular shrine to the Virgin Mary in Mexico City) would have been a slap” in the face, Francis told reporters on his flight to the U.S. He also pledged to visit Mexico soon.

On Sunday (Nov. 1), Cardinal Norberto Rivera Carrera of Mexico City confirmed in a homily that Francis would visit the country starting on Feb. 12. Rivera provided no further details of a possible itinerary and Vatican officials just arrived this week in Mexico to begin planning for the trip.

But Ciudad Juarez, a key border crossing, continues to be mentioned as a venue.

“The subject he (Francis) wants to address is migration and Ciudad Juarez is being signaled,” Archbishop Carlos Aguiar Retes of Tlalnepantla told a Mexican newspaper.

During his U.S. visit, Francis repeatedly called on Americans to be more welcoming to immigrants. If Francis does go to the border, it would send a powerful message about the Catholic Church’s long-standing demand for immigration reform and better treatment of Mexicans and others who enter the U.S.

In April 2013, Boston Cardinal Sean O’Malley and other U.S. churchmen, along with a dozen other bishops from three other countries, celebrated Mass on the U.S. side of the border fencein Nogales, Ariz., as a sign of solidarity with immigrants.

That is the kind of gesture Francis is known for. On his first trip outside Rome after his election in 2013, he celebrated Mass on an altar made from an old boat on the remote Mediterranean island of Lampedusa, where refugees from Africa often land — or where their bodies wash ashore after drowning during the dangerous passage.

When he visited the Holy Land in 2014, Francis also made an impromptu stop to pray at the wall that separates Israel from the West Bank.

But if the pontiff stops at the Mexican border with the U.S., he could prompt more criticism from conservative Catholics, who have not been happy with his social justice agenda or the church’s push for immigration reform, in particular.

When O’Malley and the others celebrated Mass at the border, commentator George Weigel criticized the bishops for turning the Mass “into an act of essentially political theater.” He said it wasn’t clear why Catholics should support immigration reform.

Wisconsin Republican U.S. Rep. Paul Ryan, a Catholic who was just elected House speaker, has ruled out considering immigration reform while President Obama is in office.