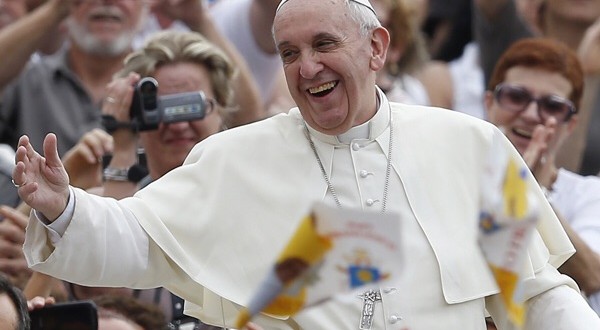 Pope Francis greets the crowd as he arrives to lead his general audience in St. Peter’s Square at the Vatican on Sept. 11, 2013. Photo by Paul Haring/Catholic News Service

Pope Francis: ‘All I want is to go out for a pizza!’

(RNS) The “Pope of the Interview” strikes again: Pope Francis has given a lengthy — and fascinating — interview to a Mexican television station, which broadcast it on Friday (March 13) to mark the second anniversary of his election.

Speaking to the program “Noticieros Televisa,” Francis displays his usual candor, dishing details about the secret conclave that elected him, talking about how he senses his papacy will be short, how the church must get tough on sexual abuse, and how all he really wants “is to go out one day, without being recognized, and go to a pizzeria for a pizza.”

Here are some of the highlights based on Vatican Radio’s English translation and the original Spanish:

On whether he likes being pope:

On what he does not like about being pope:

“The only thing I would like is to go out one day, without being recognized, and go to a pizzeria for a pizza. … In Buenos Aires, I was a rover. I moved between parishes and certainly this habit has changed. … It has been hard work to change. But you get used to it. You find a way to get around: on the phone, or in other ways.”

On how long he thinks he will be pope:

“I have the feeling that my pontificate will be brief: four or five years; I do not know, even two or three. Two have already passed. It is a somewhat vague sensation. Maybe it’s like the psychology of the gambler who convinces himself he will lose so he won’t be disappointed, and if he wins, is happy. I do not know. But I feel that the Lord has placed me here for a short time, and nothing more. … But it is a feeling. That’s why I always leave the possibility open.”

On criticisms that he talks too much, and too spontaneously:

“I talk the way I talk, like a parish priest, because I like to talk that way. I’ve always spoken that way. Always. For some it’s a defect, I don’t know. But I think the people understand me.”

On how voting works in the conclave:

“The phenomenon of a conclave vote is interesting. There are very strong candidates. But many people do not know who to vote for. So six, seven, names are chosen that are a kind of depository, while people wait to see who to definitively vote for. This is how people vote when the group is large. I was not the recipient of definitive votes, but provisional ones, yes.”

On his surprise in being chosen on the second afternoon of voting:

“Something happened, I do not know what. In the room I saw some strange signs, but … they asked me about my health … and stuff. And when we came back in the afternoon (after lunch) the cake was already in the oven. In two votes it was all over. It was a surprise even for me.”

On the sense of peace that has never left him:

“During the vote I was praying the rosary — I usually pray three rosaries daily — and I felt great peace, almost to the point of not being aware of myself. It was the very same when everything was resolved, and for me this was a sign that God wanted it, great peace. From that day to this I have not lost it. It is ‘something inside,’ it is like a gift. I do not know what happened next. They made me stand up. They asked me if I agreed. I said yes. I do not know if they made me swear on something; I forget. I was at peace.”

On his predecessor, Benedict XVI, retiring:

On whether popes should retire at 80, as cardinals are required to do:

“I do not really like the idea of ​​an age limit. Because I believe that the papacy is a kind of last instance. It is a special grace. For some theologians the papacy is a sacrament. … I do not think so, but I want to say that it is something special. To say that one is in charge up to 80 years, creates a sensation that the pontificate is at it’s end and that would not be a good thing. Predictability.”

On preventing sexual abuse by clergy:

“Just one priest abusing a child is enough to move all of the structures of the church to confront the problem. Why? Because a priest has the obligation to help a child grow, in sanctity and in his or her encounter with Jesus. Whoever abuses destroys the encounter with Jesus. One must listen to those who have been abused. And I have listened to them here. … The interior destruction they have suffered. They (the abusers) are cannibals. In other words, it’s as if they have eaten these children up. They destroy them, no? Even if it’s just one case, it’s enough for us to be ashamed and to do all that we can do. In this, we must go forward, we cannot take even one step back. To destroy a child is horrible; it’s horrible.”

On why he will not stop at the U.S-Mexico border on his September visit to the U.S:

“I thought about doing it, because I would like to enter the United States through the Mexican border. … But how could I go to Mexico without visiting the Virgin of Guadalupe (shrine)? Mexico needs a week to visit. I want to visit without rushing.”

On ‘disastrous’ homilies that drive Catholics away, often to evangelical churches:

“I do not know if they (bad sermons) are the majority — but they do not reach the heart. They are lessons in theology and are abstract or long, and this is why I devoted so much space to them in Evangelii Gaudium (his landmark statement from 2013). Typically evangelicals are close to the people; they aim for the heart and prepare their homilies really well. I think we have to have a conversion in this. The Protestant concept of the homily is much stronger than the Catholic. It’s almost a sacrament.”

On the reputation Argentines have for being proud:

“You know how an Argentine commits suicide? He climbs to the top of his ego and jumps!”

Previous The Apocalypse: More Important and Complex than Hollywood’s Concerns
Next The Kingdom of God on Earth, and the Walking Wounded