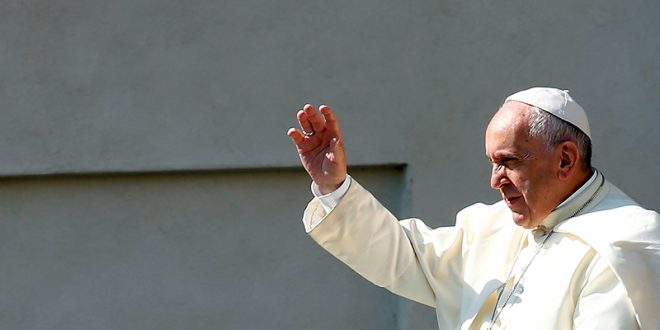 Pope Francis waves as he arrives to lead his Wednesday general audience in Saint Peter's Square at the Vatican on June 8, 2016. Photo courtesy of REUTERS/Tony Gentile *Editors: This photo may only be republished with RNS-POPE-HERETICAL, originally transmitted on June 9, 2016.

VATICAN CITY (RNS) Pope Francis has called on Catholics to adopt a “healthy realism” in their approach to their faith, and he decried rigid idealists as heretics.

Speaking during morning Mass on Thursday (June 9), Francis told congregants at the chapel in the Vatican guesthouse to try their best to seek reconciliation with others rather than pushing strict rules and a “take-it-or-leave-it” style of evangelism.

“Many times you can’t reach perfection, but at least do what you can, come to an agreement,” Francis said during his homily, quoted by Vatican Radio. He appealed to the example given by Jesus, whom the pontiff said adopted a “healthy realism.”

“Jesus always knows how to walk with us, he gives us the ideal, he accompanies us towards the ideal, he frees us from being caged in by the rigidity of the law and he tells us: ‘But, do as much as you can.’ And he understands us well. He is our Lord and it’s this which he teaches us.”

Speaking in a tone of irony, Francis said some often tossed out swear words “with a great deal of charity, but we address them to others.”

“Allow me to use a word that seems a bit strange,” he continued. “It’s the tiny sanctity of negotiations. ‘I can’t do everything, but I want to do everything, so I reach an agreement with you. At least we don’t trade insults, we don’t wage a war and we can all live in peace.’ Jesus is a great person! He frees us from all our miseries, and also from that idealism which is not Catholic.”

Noting the presence of children at the Mass, Francis also told adults “not to worry, because the preaching of a child in church is more beautiful than that of a priest or a bishop or a pope.”

Francis’ homily continued the focus on pastoral care that has defined his papacy, during which he has urged members of the clergy to be understanding toward individual circumstances and be forgiving of their flock.

While the pope’s conciliatory tone has seen him win favor with progressives seeking a church that responds to modern-day problems, the pontiff’s approach has drawn criticism from traditionalists who believe he is trying to water down Catholic doctrine.

Previous At Interfaith Pride Service Clergy Speak On Journey from Silence to Celebration
Next College dorms a new front in U.S. battle over transgender rights