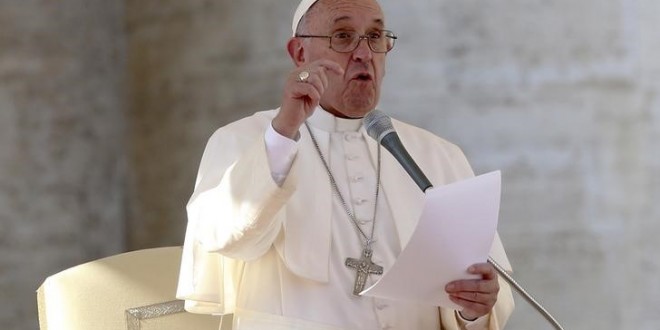 VATICAN CITY (Reuters) – Pope Francis on Sunday condemned the leak of sensitive Vatican documents as a deplorable crime but said it would not distract him from forging ahead with reforms at the Holy See.

The leaks are one of the biggest internal scandals to hit Francis’ papacy and were reminiscent of the “Vatileaks” furor that preceded the resignation of former Pope Benedict in 2013. The Italian media has dubbed the latest episodes “Vatileaks II”.

Making his first public comment about the leaks since the arrest last week of two people suspected of giving the documents to Italian journalists, he asked the faithful to continue praying for the good of the Church.

“I want to tell you that this sad fact will certainly not distract me from the work of reform that is moving ahead with the help of my aides and the support of all of you,” he told tens of thousands of people in St. Peter’s Square for his Sunday blessing.

Last week, the Vatican arrested two people – a high-ranking Holy See official and an Italian woman who works in public relations – for allegedly leaking the documents to the authors of two new books.

Both were members of a commission Francis set up several months after his election in March 2013 to advise him on financial and administrative reforms in the Holy See.

“Stealing those documents is a crime, it is a deplorable act that does not help,” he said, adding there was no need to leak them because change was happening.

“I commissioned that study myself and I and my aides know all those documents well already and measures were taken that have already started to bear fruit,” he said in remarkably blunt comments.

The commission completed its work last year and handed its report to the pope, who subsequently made changes in Vatican administration, including the establishment of a new economic ministry and increased power for Vatican financial regulators.

The Vatican said when the arrests were announced the leaks represented a “serious betrayal of the trust bestowed by the pope” on commission members.

It was the third time this year the Vatican has had to deal with leaks. In June, the pope’s encyclical on the environment was leaked before publication and last month a private letter from 13 conservative cardinals complaining about a meeting of bishops on family issues was published by an Italian magazine.

Some Italian commentators have said the leaks, combined with a false report in an Italian newspaper that the pope had a brain tumour, were part of a move by conservatives to weaken Francis by purporting to show he is not in control of the 1.2-billion-member Catholic Church.

Last week’s arrests were the first in the Vatican since Paolo Gabriele, Benedict’s butler, was arrested in 2012 for stealing documents from the pope’s desk.

One of the books published last week was by Italian journalist Gianluigi Nuzzi, whose 2012 book “His Holiness”, was based on leaked documents received from Gabriele.

Previous The activists’ playbook behind Obama’s Keystone rejection
Next Ask an Atheist: Will we ever have an atheist president?