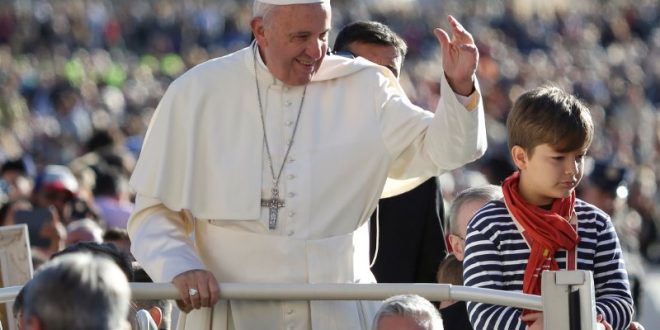 Pope Francis, flanked by a child invited by him to do a tour on his popemobile, arrives to lead his Wednesday general audience in Saint Peter's square at the Vatican October 12, 2016. REUTERS/Alessandro Bianchi

VATICAN CITY (Reuters) – Pope Francis, in his strongest appeal to date on the conflict in Syria, on Wednesday called for an “immediate ceasefire” to allow for the evacuation of civilians.

The war in Syria has escalated since efforts to reach a ceasefire collapsed in September. Syria and its ally Russia subsequently launched their biggest offensive on the city of Aleppo’s rebel-held sectors.

The air strikes have drawn widespread condemnation, including calls from France and the United States for an investigation into war crimes they say have been committed by Syrian and Russian forces.

“It is with a sense of urgency that I renew my appeal, imploring those responsible with all my strength for an immediate ceasefire,” he said before tens of thousands of people at his weekly general audience in St. Peter’s Square.

Francis said a ceasefire was essential “at least for the time necessary to allow for the evacuation of civilians, especially children, who are still trapped by cruel bombardments.”

Francis has made many appeals for an end to the bloodshed in Syria. Last month, he urged forces to stop bombing civilians in Aleppo, warning them they would face God’s judgment. He did not name those carrying out the air strikes.

On Sunday, Francis promoted the current Vatican ambassador in Syria, Italian Archbishop Mario Zenari, to the high rank of cardinal in order to show the concern of the 1.2 billion member Catholic Church for Syria.

It was believed to be the first time in recent history that a Vatican ambassador, known as a nuncio, would have the rank of cardinal.

Previous Trump, American Fascism and Why I’m Voting for Hillary
Next Father Knows Best: Does God Hear Me When I Pray?