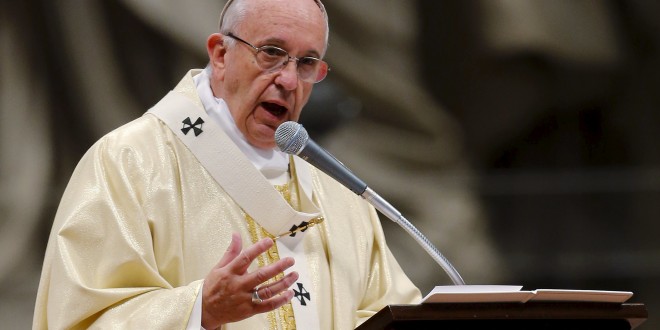 Pope Francis celebrates a mass in honour of Our Lady of Guadalupe in St. Peter's Basilica at the Vatican, December 12, 2015. REUTERS/Giampiero Sposito

VATICAN CITY (Reuters) – Pope Francis on Sunday urged the countries that signed the landmark Paris agreement on climate change to join in a concerted commitment to put it in practice urgently and to remember the poor as they do so.

“Putting it into practice will need a concerted commitment and a generous dedication on the part of all,” he told tens of thousands of people in St. Peter’s Square for his noon address.

“I exhort the entire international community to move forward urgently along the path that has been taken, in a sign of solidarity …,” he said.

Francis, who last May issued a major encyclical on the need to protect the environment and arrest global warming, said he hoped particular attention would be “guaranteed for the most vulnerable populations”.

Previous Strangers Drowning: A book about dilemmas “do-gooders” face
Next Ask An Eastern Orthodox Christian: Do you have to do confession?