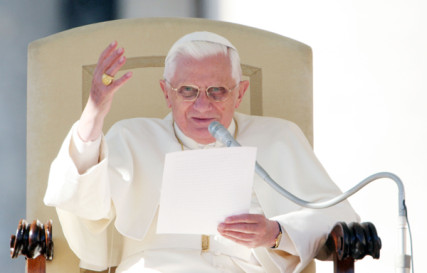 On Monday Pope Benedict XVI announced that he would retire at the end of February, citing his advanced age and failing strength.

As soon as the announcement was made, the social media site Twitter exploded with hateful, often profane messages, many of them calling for the aging pontiff's death.

“Hey, @Pontifex: why don't you die like every guy before you,” one person tweeted. “Pontifex” is the pope's user name on Twitter, established last December.

“Resignation via slitting your wrists in a bathtub please @Pontifex,” said “Internet Female.”

Most of the tweets posted by Twitchy are far too profane to be reproduced here, but many called the pope a Nazi while others called him a pedophile.

BBC actor and Scottish comedian Frank Boyle weighed in, saying the pope would soon be laughing with “Hitler in Hell.”

“There'll be a resignation ceremony for the Pope, where he fires electrical rays from his fingers as Darth Vader throws him down a lift shaft,” he said later.

“Question #2: what's it like to run a gigantic ridiculous cult right out In the open and have the support of mainstream governments & media?” he asked in one of the few tweets fit to print.

“What the morally bankrupt and hate-filled don’t understand is that the pope will pray for them and hold them in his heart,” the Twitchy staff wrote on Monday.

Ed Morrissey wrote at the conservative blog Hot Air that the last time a pope resigned, “Gutenberg hadn’t yet invented the printing press.”  He went on to call Pope Benedict “one of the Church’s greatest living theologians,” saying he “has been a highly-respected leader of faith in his pontificate.”

Previous Does God approve of me?
Next Meet Laura Stembridge, our women and gender studies writer