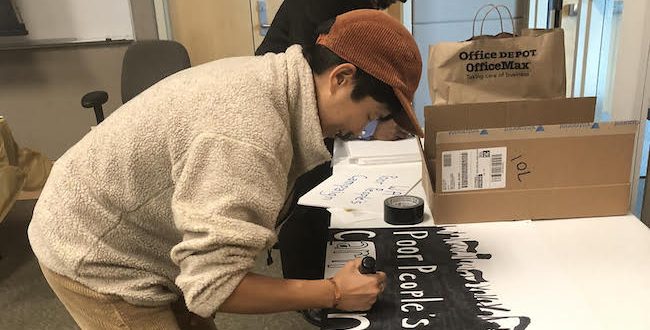 These are just some questions the Rev. Bianca Davis-Lovelace said the Spokane community can ask themselves as they consider getting involved in the Poor People’s Campaign: A National Call for Moral Revival, which is hosting a training event, “14 Steps to Moral Fusion Organizing,” this Saturday, Sept, 7, from 10 a.m.-4 p.m.

Davis-Lovelace is the tri-chair of the Washington State Poor People’s Campaign, and she, along with others from WAPPC, will be launching the Spokane Task Force through this training event at the MLK, Jr., Family Outreach Center, 500 Stone St.

The goal of the WAPPC, according to its website, is to build “a long-term movement that is building power for the justice and liberation of the poor and all those impacted by the evils of systemic racism, the war economy, ecological devastation, poverty, and our distorted moral narrative.” These issues are the five main pillars the campaign.

The idea behind the name Moral Fusion Organizing, according the Davis-Lovelace, is to organize individuals around these key issues from a moral lens.

“It’s immoral to not have access to healthcare,” said Davis-Lovelace. “We are here to say that this is immoral and trying to appeal to the morality of people. It’s not about political parties but what is right and what is just.”

This event and the campaign itself are designed for impacted people, community members, leaders, organizers, activists, faith leaders, students, etc., located in Spokane, Spokane Valley, and throughout Eastern Washington.

Currently, there are about nine people involved in the Spokane Task force, who represent several churches, the local chapter of the NAACP, as well as the Peace and Justice League of Spokane.

“In Spokane, we are in the very beginning stages, and we reach out to everyone,” said Davis-Lovelace. “We don’t identify as progressive, liberal, or conservative.”

This second generation of the PPC began on Dec. 4, 2017, 50 years after the Rev. Dr. Martin Luther King Jr. and others started a PPC for not just civil rights, but human rights. The individuals who added “The National Call for Moral Revival” to the current campaign’s name and who lead it today are Rev. Dr. William J. Barber, II, and Rev. Dr. Liz Theoharis.

PPC is an anti-poverty campaign that unites different coalitions, from various faith and non-faith backgrounds, that work on the same issues to fight against policy violence, which according to Davis-Lovelace is “policy that is set in place that harms others in some form, shape and fashion.”

She adds, “You should not have to die because of policy.”

Rather than center their organization on political agendas and partisanship divides, organizers within the movement center their work on the issues and on the problems that include voter suppression, access to healthcare, living wages, equity in education, and so much more.

The WA PPC came to Spokane in April of 2019 to do on-the-ground research as to the varying needs of the community and learned then that the problems facing Spokane are very similar to the ones the West side of the state are facing, particularly homelessness and poor treatment of immigrants. At that time, they decided that what Spokane needed most was an introduction to activism, thus the reason for this weekend’s event.

While they only have a couple handfuls of Spokane activists on the Task Force now, the leaders of the WA PPC would love to have 50-100 people involved, but realistically, they believe a healthy local chapter of 20 persons would be an excellent start.

While the main event of the WA PPC this weekend in Spokane is the “14 Steps to Moral Fusion Organizing” training, they will be hosting two other local events.

On Friday, Sept. 6, they will serve dinner to around 50 people experiencing homelessness at the Family Promise of Spokane Open Doors Emergency Shelter, which recently lost some of its funding limiting the number of people they could serve in their overnight shelter from 80 to 30.

On Sunday, Sept. 7, the WA PPC, along with its newly trained Spokane Task Force, as well as others in the community interested in participating, will host a vigil at 1 p.m. at the Greyhound Bus Station (221 W 1st Ave.) to show solidarity with the immigrant population and to stand against the violence and dehumanization that has been directed toward them.

Those who are interested in the Saturday training are encouraged to RSVP online on the WA PPC Spokane Task Force website. The event is free and lunch will be provided.

Davis-Lovelace and her colleagues believe people will come to the event because the rights they are fighting for affect everyone, and the WA PPC is a coalition that is doing something about it.

“It’s not a time of thoughts and prayers,” said Davis-Lovelace. “It’s a time of action.”

Will you support local religion reporting by make a recurring or one-time donation to FāVS so we can continue publishing content like this?

A virtual fundraiser will be held this week to raise money for Salish School of Spokane and increase awareness of its mission.